The Romanian army at the end of the 1916 campaign 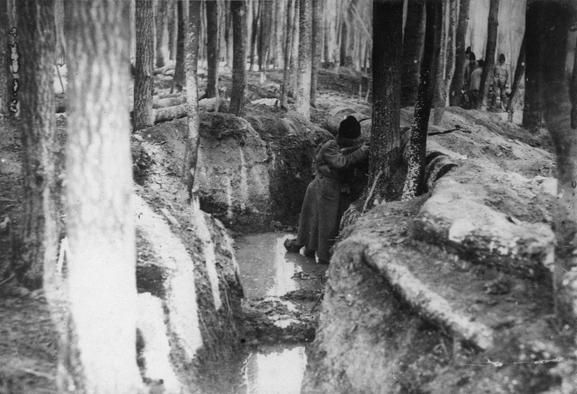 For Romania, the campaign of 1916 proved to be a disaster. Hundreds of thousands of deaths among the army and the civilian population, two thirds of the territory occupied by foreign troops and the continued threat posed by the annexation plans of Bulgaria and Austria-Hungary. As for the morale of the soldiers and the population it was non-existent. And yet, the Romanian army was about to be reborn.

After three months of bitter fighting, the remaining units of the Romanian army that had entered the war in August 28, 1916 were in full retreat to Focșani and the Siret river. Here, the front would eventually stabilize during the winter and the beleaguered Romanian forces would be settled between Russian army units. The Romanian Front started in the mountains of Moldavia on the following line: the section of Vatra Dornei- Caşin was covered by the Russian 9th Army; the Romanian Second Army was located in the Putna valley, from Caşin to Irești. The Russian 4th and 6th armies were placed from Ireşti, along the Putna, the Siret and the Danube.

The Romanian army’s fighting capability was almost annihilated. Of the 505.000 soldiers and officers that were mobilized in August 1916, only 194.945 (39%) were accounted for in Moldavia. On January 1, 1917, the Romanian state comprised a third of its former territory. In addition to Moldavians, refugees from Oltenia, Muntenia, Bucharest, etc, more than a million Russian soldiers came to the area. Lodging and feeding them all would pose a real challenge for Romanian authorities. If Russian military support lacked in the 1916 campaign, Moldavia was now suffocated by the presence of Russian troops. Even more difficult was the supply of Moldavia. Rail transport was thrown into total chaos.

Most trains came with supplies and armaments for the Russian army, and army trains for the Romanian army arrived with great delays. And as if that wasn’t enough, a new nightmare made its presence known in Moldavia. The typhus epidemic ravaged the civilian population as well as the army. The desperate measures taken to combat this scourge needed time to prove effective. Infirmaries were established close to the combat units to which both the soldiers and the population had access. Hospitals, steam baths and delousing chambers were created, the measures being implemented under the coordination and assistance of the French Military Mission.

Radu R. Rosetti had a meritorious activity as Chief of the Operations Bureau of the General Headquarters of the Romanian Army, as a General Staff Officer and then Commander of the 47th/72nd Infantry Regiment. He makes a vivid description of the 1916 campaign: “Horrible. After the shame at Turtucaia, the tomb of Muntenia, the baleful silence on the Siret valley, without any news from our people, it seemed as if everyone had died. That winter was not like any other winter, cold enough to crack stones, with snowdrifts as high as mountains, with terrible snowstorms. In the retreat, the soldiers- until the huge reorganization- were scattered every which way to recover; the disabled, often crawling in crutches, full of blood, only in their gowns and slippers, dressed the way they left the hospitals, walking hundreds of kilometres on foot, with muted groans of pain, with hatred in their eyes”.

“We will be again what we have been and more than that!”

In the tragic winter of 1916-1917, the Romanian scholar Nicolae Iorga presented in the Parliament in Iași perhaps the most memorable speech in his political career, recalling the words of the great voivode Petru Rareș, who also had to go into exile: “We will be again what we have been and more than that!”

For the Central Powers, the victory was like a breath of fresh air, although it was costly- the Germans lost 60.000 people. The wealth of the conquered territory gave hope to the Germans and Austrians that the difficult food and fuel shortages they were facing will be greatly reduced. In spite of efforts to destroy the oilfields, the Central Powers captured large quantities of fuel. From December 1916 to October 1917, two million tons of grain and an approximate equal amount of other food stuffs, as well as 272.000 tons of petroleum products, were plundered from Romania.