“The Romanian army withdrew on its knees, defeated, but not beaten” 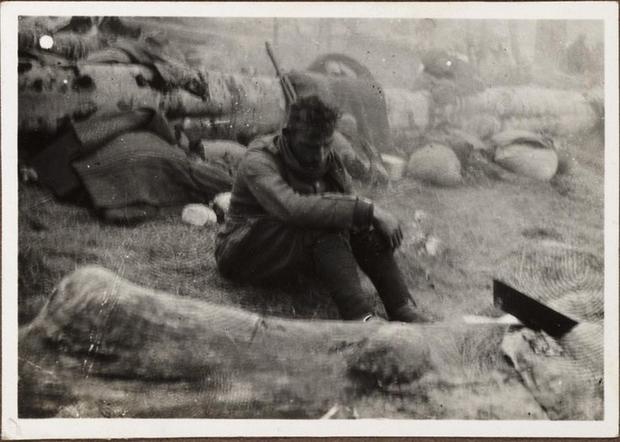 One of the most emotional first-hand accounts about the dramatic withdrawal of the Romanian population and army to Moldavia was left to posterity by physician Vasile Bianu, an observer and active participant in the events of the autumn and winter of 1916. Vasile Bianu describes the panic that gripped the populace, government and army in their hurried evacuation to Moldavia. Regarding what was left behind, Bianu depicted scenes of absolute chaos: everything was being destroyed- nothing had to be left to the enemy.

“Even worse than this was the wandering: almost the whole population, the rich and the poor, gripped by the fear of the enemy, by the horrors it was said would be inflicted on all the inhabitants, and especially to children, to boys and girls, packed it in and whole villages left with what the hoar-frost could carry. The ruin stretched as far as the eye could see. Among the flocks of wanderers, there were also soldiers who lost their units, some of which were totally destroyed in battles.

The trains were overwhelmed by travellers, the wagons full to the brim, laden with people of all ages even on rooftops; many were hanging on the stairs; even on the locomotive, on its front, on the tender, in all the corners where one could climb, you could see numerous wretches hanging like a bunch of grapes. Plenty of misfortunes happened because of the crowding, some died on the spot, others broke a leg or hand, remaining incapacitated for life.

You could see everywhere convoys of hundreds and thousands of refugees, confused, haggard and rather unclothed. Carriages, horse-drawn wagons, chariots, loaded with all sorts of objects, with children crammed between them, were slowly and continuously passing in uninterrupted lines on the roads cleared by the incessant rain, following tracks left by hooves and cartwheels; all of this was ongoing during the day and night and it seemed endless.

Many poor people who could not afford to leave by train or carriage walked on foot with the luggage on their backs and the mothers with the children in their arms and hands, with some of the little ones falling on the side of the road and not getting up again. Crying and moaning everywhere, a harrowing grief wherever you looked, you thought that the world’s destruction was at hand. Everyone went forward, not knowing how far, without the bare necessities of life, in the most abject poverty, they went in the world to escape one misery just to find an even greater one, as the authorities called on them in vain to stay in place, to remain in their houses and households, being in any case better even if the enemy came to rule over them, than to leave in winter time, enduring cold and hunger, taking shelter in wooden shacks or small coops! It was all in vain, everybody was gripped by panic; especially when they saw that the government of the country moved to Iași, there was no way to reassure them, any argumentation was superfluous, the wandering madness took its hold on everyone.

They all fled to Moldavia, who had doubled its population; all the cities and even its villages were overcrowded, leaving no place to live or any means of livelihood. Bread was in short supply so much so that people stood crammed at the doors of the bakeries, waiting for the baking of bread; there was no other food; everyone was asking for bread! The restaurants and taverns in Buzău were full of customers, so you could not find a place at the table, some were eating standing, if they had anything at all to eat; many times the people broke into the kitchen and took the pots and the kettles with food from the fire, even if the meat and vegetables were not yet well cooked, took them and went into the street, dividing the food as they could; for this reason most of these premises were closed, for fear of robbery.

The army was also retreating in disarray, in any way it could. Thrown rifles, destroyed cannons, wagons, caissons, effects left everywhere; horse corpses filled the roads; stations were full of wounded, waiting to be transported to any hospital. In each station they had to wait for six or seven trains for the way to be cleared so they could move forward; they waited for hours.

Behind the retreating armies, in order to leave only ruin for the enemy, everything was destroyed so that nothing would fall into his hands. The wheat-barns were torched, the bridges were plunged into the rivers, the tunnels blown up; the large oil rigs, petrol and gas wells were destroyed along with thousands of wagons; ammo dumps and arsenals were mined; the mills and factories were torn down; the silos were bombed, all of which were worth millions and millions.

Who could describe all this sadness and the sharp pain of these terrible moments when it seemed that the good Lord turned his face away from us?

There was grief and desolation everywhere, the weather continued to worsen and the days were gloomy because of the rains that turned the roads into marshes and puddles, where people swam to their knees. The soldiers stood their ground during the day, waiting for the enemy, or fighting with him when he appeared, and at night they retreated in darkness, going from place to place, without finding any shelter. So, it was in this way that they retreated, in thinly stretched lines, in this way our tired troops withdrew, saddened and destitute, with nothing remaining in their souls but the hope in a better future, a hope that did not leave them for a minute, as they went to the holy land of Moldavia, guided by the great and valiant figure of their beloved King! In this way, the Romanian army was withdrawn from all over Muntenia, under the ever-increasing pressure of a more numerous and stronger enemy without any help from the many aids promised by our Allies and especially by our neighbour, the great and powerful Russia. Our army withdrew, on its knees, defeated, but not beaten or destroyed; it remained with a great soul, with the soul of a lively people, whom the crowds of barbarians could not crush, nor the sufferings endured for two thousand years.”