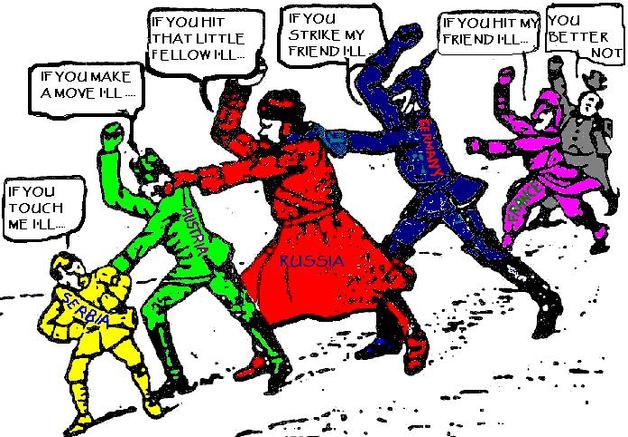 At the beginning of the First World War, Romania and Italy were in a similar situation. Both states were bound to the Central Powers through secret agreements, but their main national objectives were in conflict with Austro-Hungarian interests. Many Romanians and Italians lived on the territory of the Austro-Hungarian Empire, and the public opinion in Romania and Italy was influenced by a powerful anti-Austrian movement. At the end of 1914 and early 1915, the two states signed two secret agreements aimed at defending their common interests against the Great Powers.

In July 1914, after the ultimatum addressed to Serbia by Austria-Hungary, Romania and Italy declared their neutrality, claiming that the conditions for “casus foederis” laid down in the treaties with the Central Powers were not met. More precisely, Romania and Italy claimed that they had no obligation to intervene in the war, as the treaties that were signed were defensive ones, and in this case, Austria-Hungary declared war on Serbia.

The pro-Entente Romanian political circles in Bucharest and the Romanian Government closely watched the foreign policy of Italy. In order to investigate the mood of Italian politicians regarding the war, an unofficial diplomatic Romanian mission left for Rome in early September 1914. The delegation consisted of two deputies, Constantin Istrati and George Diamandy, brother of Constantin Diamandy. The latter was the ambassador of Romania in Rome in 1913, and the appointed the ambassador of Romania to St. Petersburg, involved in the secret negotiations for a military agreement with Russia.

The Romanian delegation was received with interest in Rome, Istrati and Diamandy having talks with several important Italian politicians, including Prime Minister Antonio Salandra and Foreign Minister Antonino Paternò Castello, the Marquis of San Giuliano. In an interview with the Italian newspaper “La Stampa” on September 18, Diamandy said the purpose of the visit was to inquire on the stance of Italian political circles. Diamandy stressed that Romania’s interests were identical to those of Italy, but stated that the visit of the two Romanian deputies was not an official mission, and they did not have any special powers from the Romanian government. In fact, they were laying down the foundation for subsequent Romanian-Italian secret agreement.

In an interview published on 19 September by the newspaper “Corriere della Sera””, Constantin Diamandy said that Romania cannot remain neutral throughout the war: “As far as we are concerned, we are too close to the war theatre in order to be able to remain inactive in perpetuity. We are surrounded by the terrible dilemma of the facts and we must act”.

The signing of the Romanian-Italian secret agreements

On September 23, 1914, a few days after the visit of the Romanian delegation, Prime Minister Ion I. C. Brătianu and the Italian ambassador to Romania, Baron Carlo Fasciotti, signed an agreement on establishing a common stance through mutual consultations. The Romanian-Italian agreement was aimed at defending the common interests of the two states against the Great Powers. The governments of the two states undertook not to abandon the policy of neutrality without an eight day’s notice.

On February 6, 1915, Romanian Prime Minister Ion I.C. Brătianu and Baron Carlo Fasciotti signed a new Romanian-Italian secret agreement, in addition to that signed on September 23, 1914. Under the new agreement, Romania and Italy committed themselves to act jointly for their common defence in the case of an aggression on the part of Austria-Hungary. The previous secret agreement remained unchanged, and the new agreement was valid for 4 months from the date of the signing.

The conclusion of the secret agreements with Italy and Russia (September 18, 1914) marked the gradual reorientation of Romania’s foreign policy, namely straying away from the alliance with the Central Powers and a rapprochement with the Entente.