The Romanian patriotic mission to the United States (1917). The attempt to organize a Romanian Legion in America 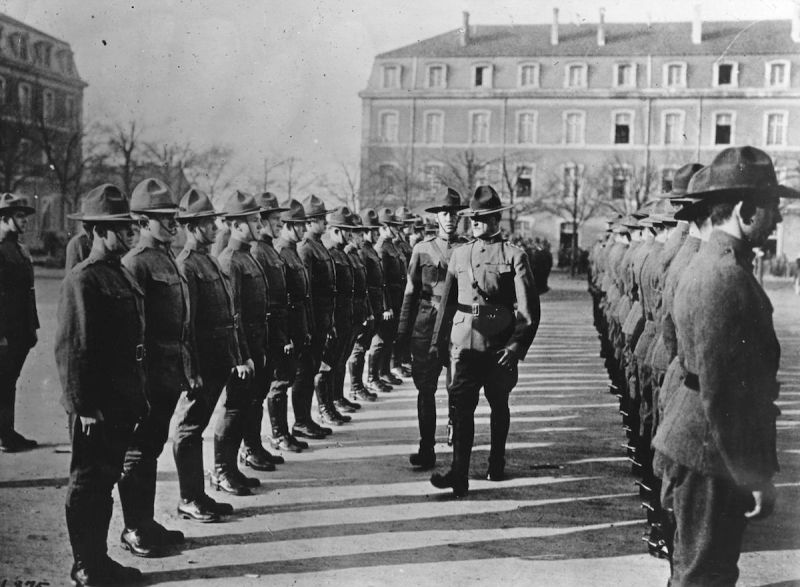 The entry of the United States of America into the First World War on the side of the Entente on April 6, 1917 gave the Romanian authorities the opportunity to try to recruit volunteers from the Romanians that were living there, in order to fight against the Central Powers. To this end, in April 1917, the Great General Headquarters of the Romanian army in Iași sent to the United States an unofficial delegation, called the “Romanian Patriotic Mission”, comprised of priests Vasile Lucaciu, Ioan Moța and lieutenant Vasile Stoica, to convince the American authorities of the necessity of organizing a Legion made up of Romanians.

Before the start of the First World War, the number of Romanians in the United States amounted to about 100.000 to 150.000 people, coming mostly from the Austro-Hungarian territories of Transylvania and Bukovina. The attempt to recruit some of them as volunteers and to organize a Legion to fight on the Western Front, seeing that transporting these volunteers to the Romanian Front would’ve been difficult, was supported by France, though US authorities were reluctant.

The unofficial Romanian mission sent to America was led by the priest Vasile Lucaciu (1852-1922), one of the most important political and cultural personalities of the Romanians from Transylvania at the end of the 19th and early 20th century. Doctor of theology and philosophy in Rome, Vasile Lucaciu returned to Transylvania, where he worked as a Greek Catholic parish priest in Șișești. He was one of the signatories of the 1892 Memorandum and one of the leaders of the Romanian National Party, having repeatedly suffered the repression of Hungarian authorities in Transylvania. Following his arrest after he signed the 1892 Memorandum, Vasile Lucaciu was elected in 1905 as deputy in the Budapest Parliament, on behalf of the Romanian National Party. With the outbreak of the First World War, he came to Romania, along with his brother, Constantine.

Given that such a trip could not be made through the West, an area under the control of the Central Powers, the members of the delegation headed east, reaching the US on June 29, after crossing Ukraine, Russia, Japan and the Pacific Ocean. The three passed through Kiev, where they received from the command of the Romanian volunteer corps in Russia a copy of the “Darnița Declaration”, an act proclaiming the right of Romanians from Transylvania and Bukovina to unite with the Kingdom of Romania.

“Wewere sent to organize the Romanians of the United States for the purpose of giving all possible help to the cause of the Allies, a cause which is of Romania and of all Romanian people.

US authorities were relunctant. War was declared on Austria-Hungary only on December 7, 1917. Eventually, the plan of a Romanian Legion from the United States was abandoned. The authorities in Washington opposed such an initiative, but they agreed to enlist Romanian volunteers in US units. Even though the “Romanian Patriotic Mission” did not meet the objective of organizing a Romanian Legion, its actions increased the number of Romanian volunteers who joined the US army, but also in the Canadian units fighting under the British flag.

Mihai-Octavian Groza, Proiecte privind crearea Legiunii Române din America și propaganda în favoarea unirii Transilvaniei cu Regatul României (1917-1918) [Plans concerning the creation of the Romanian Legion in America and the propaganda in favour for the unification of Transylvania with the Kingdom of Romania], in the “Sentenția” magazine, no. IV, Târgu Jiu, 2013.