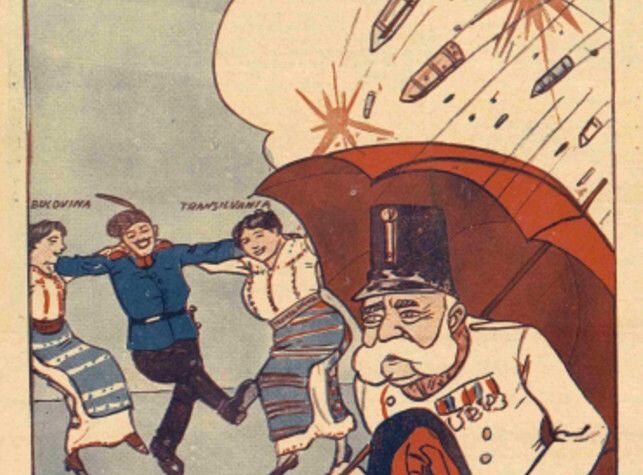 With the declaration of Romania’s neutrality on July 28, 1914, the governments of Berlin and Vienna nonetheless continued to take comprehensive steps to obtain Bucharest’s military support. In order to gain Romania’s favour, Germany tried several times, unsuccessfully, to persuade the government in Budapest to grant more rights to the Romanians in Transylvania, a province with a majority Romanian population, at that time a part of Hungary. However, the uncompromising stance of the leaders in Budapest regarding the rights of Transylvanian Romanians was the main cause of the anti-Austro-Hungarian sentiment among the Romanian population.

The Austro-Hungarian ambassador to Bucharest, Ottokar Czernin, the future Foreign Minister of Austria-Hungary between December 1916 and April 1918, was urged by the Hungarian Prime Minister István Tisza to try to convince Romania in joining the Central Powers by any means, but to carefully rule out any concessions to Romanians in Transylvania. Tisza strongly believed that the government in Bucharest could be determined to enter the war only through an Austro-Hungarian victory against Russia.

In August 1914, Tisza wrote the following to Czernin: “The attitude of this country [Romania] towards Bulgaria and the repudiation of the Treaty of Bucharest [the secret defensive agreement between the Central Powers and Romania] is all that we hoped for. I never believed that Romania, especially after Italy’s declaration of neutrality, could enter the war on our side before we had achieved a decisive success against the Russians”.

Conservative leader Alexandru Marghiloman, a supporter of Romania’s alliance with the Central Powers, asked the German legation to take steps so as to persuade the Hungarian government into granting concessions to Transylvanian Romanians, in order to prevent Romania from joining the Entente, but István Tisza was unconcerned. In another letter to Czernin, the Hungarian premier informed him that he had heard of Marghiloman’s request. But, in his opinion, “the broadest concessions will not influence Romania’s attitude. It depends exclusively on the way in which Bucharest will assess the chances of the belligerents”.

Concerned about obtaining a quick victory against Russia, to avoid making any concessions to the Romanians in Transylvania, Tisza made overtures to the German ambassador in Vienna to send more troops to the Eastern Front, all the while promising the Romanians that their demands could be accepted, only if they supported the Austro-Hungarian war effort.

“Hurry, because the waiting cannot last without becoming ridiculous and dangerous!”

The attitude of the Hungarian Prime Minister deeply dissatisfied the leaders in Berlin who wanted Romania to enter the war on the side of the Central Powers, as well as the supporters of this alliance in Bucharest. Romanian writer Ioan Slavici, originally from Transylvania, addressed an appeal to Hungarian leaders in Budapest, in an article published in the Ziua newspaper on November 27, 1914: “Your only supporters in Romania say to you «Hurry, because the waiting cannot last without becoming ridiculous and dangerous! »”.

István Tisza’s intransigent attitude towards the Romanians in Transylvania also dissatisfied many politicians in Berlin. In a letter to the Hungarian prime minister, German Deputy Matthias Erzberger, future finance minister and vice-chancellor of the Weimar Republic, argued the necessity of Romania joining the Central Powers in order to obtain victory on the Eastern Front. Tisza responded in equal firm terms, arguing that this issue did not influence Romania’s position, but rather provoked the incitement of Romanians in Austria-Hungary, who might have more radical demands. In this regard, the Hungarian prime minister wrote to the German deputy: “With all the friendship and allegiance of a loyal ally and in full awareness of my responsibility, I must ask insistently any German that is willing to protect their homeland from a new danger, to refrain on the unfortunate subject of concessions that must be made to Romanians in Hungary”.

The repeated attempts by politicians in Bucharest and Berlin to obtain certain concessions to Romanians in Transylvania failed. The prime minister of Budapest firmly rejected any talks regarding the claims made by the representatives of the Romanians in Austria-Hungary.