The Royal Family at Alba Iulia and Blaj, 1919. Queen Marie: “We finally arrived at Alba-Iulia, the town whose name has a special significance for any Romanian heart” 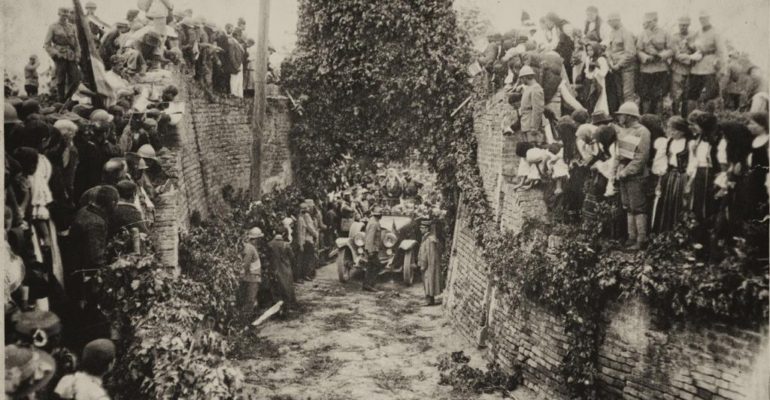 Returning from the Paris Peace Conference, Queen Marie, accompanied by King Ferdinand, their daughters and many important political and military figures started a tour of Transylvania. It was the first time the Royal Family visited Transylvania after the Great Union. On May 30, 1919, the royal couple finally reached Alba Iulia and Blaj, cities of great importance for the events that transpired on December 1, 1918.

Queen Marie wrote the following in her diary:

“I set off early on one of the most beautiful roads I ever saw, through a mountain passage next to some glorious forests. There was no sun, but even without, it was fantastically beautiful. In many villages, there was a loyal and warm reception, until we finally arrived at Alba-Iulia, the town whose name has a special significance for any Romanian heart. It’s hard to describe the reception which we had, people just went crazy with enthusiasm.

After a military parade we entered the old fortress through the same gateway that Michael the Brave entered a few centuries ago, and we were frantically acclaimed. Ileana had arrived from Bucharest and was with us. Alba Iulia is a nice and old place with a whole town in the middle of the fortifications.

We received all the authorities, there were huge speeches, then an endless but wonderful parade of peasants from all the villages, thousands upon thousands. God knows when we arrived for lunch and how long it lasted- we lost track of time and it was really difficult to leave to get to Blaj where we were expected. Eventually I left after a lunch which was served by beautiful young women dressed in popular costumes, to the delight of the gentlemen. It rained, but that did not soften the enthusiasm.

We arrived late at Blaj. It is a pretty and simple town, it has something emotional about it and has always been a cultural centre for the Romanians, with many schools and many priests. Perhaps they were the most enthusiastic of all, there were thousands of peasants who almost went out of their minds with delight. I was at a religious service- the young Bishop Hossu was present. I liked the service, it was getting dark and the church was full of candles, I felt spirited, the choir was good. Blaj left in me a special impression of sympathy.

Despite the fact that it was getting dark, we witnessed an endless parade of peasants, thousands and thousands. After the night came, torches were lit, and the peasants continued to acclaim with all their might. There were enormous carts, wedding groups, horsemen, something extraordinary and intense.

I finally went to dinner at ten in an old monastery, in a long candlelit room, Bishop Hossu sat beside me and we had a very pleasant conversation. He also knew a little bit of English and French. I got to bed very late, feeling that it was a wonderful day”.