The Russian Revolution: timeline and dictionary 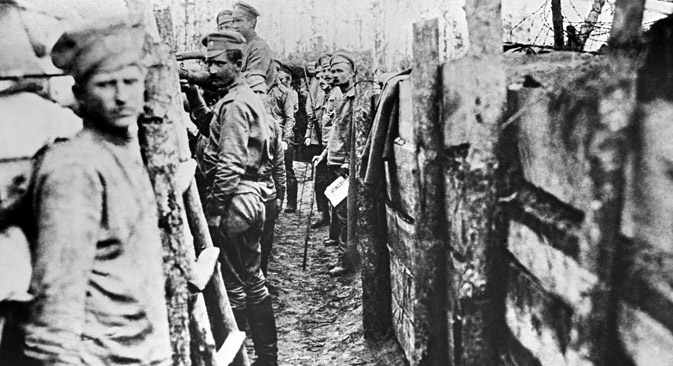 In order to better understand an event, an overview is needed from the outset, with an emphasis on terms and key dates defining the whole subject. Below is a short chronology of the Russian Revolution, but also of the main actors who were crucial in the unfolding of one of the most important events in Russia’s history and of the First World War.

The Russian Empire enters the war against Germany.

The night of December 29 to December 3

Rasputin, a close advisor to the imperial family, is assassinated by a conspiracy led by Prince Felix Yusupov, a convinced monarchist, who wanted to free the Emperor from the influence of the mysterious monk.

Women protest during Women’s Day. The workers in Viborg go on strike and started filling the streets of Petrograd.

Tsar Nicholas II orders the soldiers to shoot the crowd, but they refuse and join the demonstrators.

The protesters headed to the Tauride Palace, the headquarters of the Duma, and created the Soviet of Deputies and Workers of Petrograd. The so-called “dvoevlastie” or “Dual Power” was established, which meant that the power was shared between the two institutions.

The Petrograd Soviet Order No. 1 called on the soldiers to elect their own representatives for the council, as the army fell under the control of the Soviet.

Tsar Nicholas II is forced to abdicate. The first provisional government is created, led by Prince Georgy Lvov and supported by the Duma and by the newly established Petrograd Soviet.

The Provisional Government decided to continue the war alongside the Allies, wishing to stay in the fight until the end.

The Allies recognize the Provisional Government.

Political and civic equality rights are introduced in Russia.

Lenin returns from his exile in Zurich. He formulates the April Theses: “All Power to the Soviets!”.

Pavel Milyukov, Foreign Minister in the Provisional Government, reassures the Allies of Russia’s commitment to the war effort.

Soldiers and workers protest against the foreign policy promoted by the government.

The Socialists join the Provisional Government with Alexander Kerensky nominated as the Minister of War.

The first All-Russian Congress of Soviets.

Bolsheviks take to the streets. They accused both Kerensky and the “bourgeois-liberal” government of being enemies of the people.

Bloody demonstrations, which were mainly instigated by the Bolsheviks, take place in Petrograd.

Prime Minister Lvov resigns. He is replaced by Kerensky.

The Kornilov putsch. The Commander-in-Chief of the Russian Army, General Lavr Kornilov, leads a coup against the Provisional Government, which fails. The Bolshevik cause is revived.

Members of the Russian Soviets endorse a Bolshevik resolution calling for the creation of a socialist government. The bourgeoisie is excluded.

The third government is formed with a Bolshevik majority. The Soviet Petrograd appoints Leon Trotsky as president.

The Central Committee of the Bolshevik Party approves an armed uprising.

The First meeting of the Revolutionary Military Committee in Petrograd.

The October Revolution. The siege of the Winter Palace. Kerensky flees.

The Right Socialist Revolutionary Party and the Mensheviks protest against the revolution. Local power is assigned to soldiers and workers. The death penalty is abolished. The Decrees on Peace and Land are issued. The Bolshevik Government appoints Lenin as president.

Germany accepts the negotiation of an armistice with Russia.

The creation of Cheka- The first Soviet secret police.

The peace talks in Brest-Litovsk begin.

The Russian Constituent Assembly is dissolved. Germany presents the conditions for the conclusion of peace as an ultimatum.

The Red Army is set up.

The Bolsheviks accept the peace conditions.

The Brest-Litovsk Peace Treaty between Germany and Soviet Russia is signed.

Anti-Bolshevik military and political forces opposed to the October Revolution. These were supporters of the monarchy; every Russian Tsar was called the White Tsar, hence the origin of their name.

In Russian, the “majority”, formerly members of the Lenin led Russian Social Democratic Labour Party. After taking power in 1917, the extreme-left party changed its name to the Communist Party (the Bolsheviks). Until 1952, the party preserved the Bolshevik name, calling itself the Communist Party of the Soviet Union (Bolshevik). The Bolsheviks supported the proletariat and the peasantry.

Translated as the “minority”, they supported the change of Russia through a bourgeois-democratic revolution. Their popularity diminished when some of their leaders defected to the Bolshevik side, like Leon Trotsky. After the Kronstadt rebellion of 1921, Menshevism was declared illegal.

Local councils of workers ever since the Tsarist period. Russian Marxists used them as a tool to fight the state, in 1917 frequently using the slogan “All Power to the Soviets”. Their importance in Russia grew exponentially after the overthrow of the Kerensky government, the parliaments being called “soviets” and the Supreme Soviet, established in 1922, being the largest legislative body of the USSR.

Members of the Revolutionary Socialist Party, set up at the beginning of the 20th century, with left-wing beliefs, but more moderate than the Bolsheviks. One of the most important members of the group was Alexander Kerensky. The party had its origins in the populist movement and was backed by peasants as they promoted a social-democratic policy.

From the latin “proles”, which, in a broader translation, means those poor people who have nothing but their children. The definition given by Marx would be: “the class of modern-day workers who, without their own means of production, have to sell their labour-power in order to live.”

Originating from the Russian “think”, the Duma represented in the past a consultative assembly of boyars. From 1711, Peter the Great dissolved this state power, but in 1905 Tsar Nicholas II was forced to reinstate it, thus guaranteeing the right to association. In a democratic state, the Duma plays the part of a lower house of a parliament.

The Soviet secret police between 1917-1922, the precursor of the KGB. The official name was the All-Russian Extraordinary Commission for Combating Counter-Revolution and Sabotage.

A form of government based on the concentration of absolute power in the hands of one man, the will of the people being minimized. The period of Tsarist domination was characterized by this, having as its basis: “Autocracy, orthodoxy, nationality”.