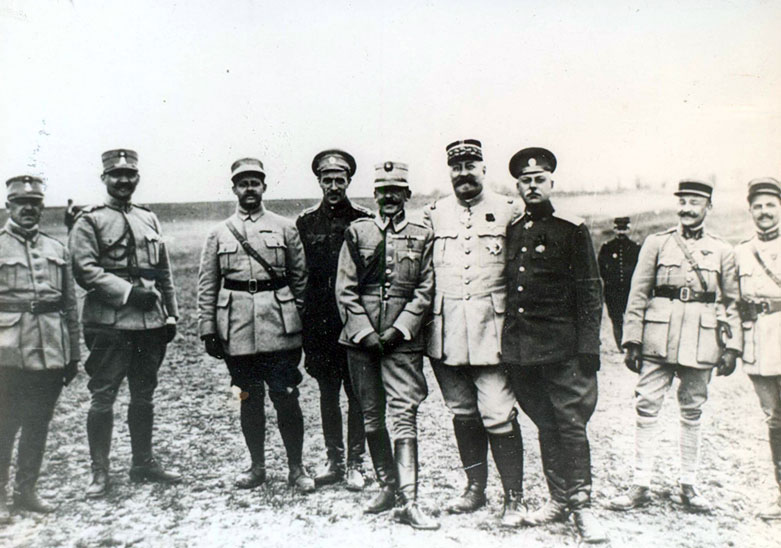 The ambassador of France to Romania between 1916-1920, Count Saint-Aulaire contributed decisively to the smoothing of Romania’s relations with the Allies. His memoirs give us a unique insight into the importance of the French Military Mission in Romania, but perhaps even more important, of the problems that General Berthelot had to overcome in his cooperation with the Russian “allies”!

“As far as my instructions are concerned, General Berthelot told me, I imagine they are the same as yours, if they have given you any, for Quai d’Orsay does not seem to want to squander such information. Here are the last words of General Joffre when I last saw him: «Russia is not too happy that you are coming. You must be on guard. As for the Romanians, the role of counsellor is always very delicate; first of all, you need to earn their trust and heart. »”

Next to King Ferdinand, General Berthelot, without ever raising his tone, exerted on the Romanian army a kind of dictatorship of competence, cold bloodedness, optimism, grin, and even gastronomy. […] General Berthelot, a gentle giant, kind and indulgent, like all burly people, had undoubtedly held the waist thickness record of the French General Staff but also of all Romania. Queen Marie, whom General Berthelot used to embrace when bidding farewell, said, «I have never been embraced by a so wide a chest»”. Robert de Flers, amazed by his extraordinary ability to withstand heavy blows, said «His belly is so large to make room for his stomach, because his rib cage is not enough. »

The personal enemy of the head of our mission, the one with which he should have had the most steadfast brotherhood of arms, was General Belyaev, the head of the Russian Military Mission, sent in great hurry after our arrival, but his was a less numerous mission, much less well put together and, most certainly, much less well received. Regarding his French colleague, General Belyaev said: «The belly of General Berthelot is so big so he can take all the kicks that I will give him in the rear. »

These kind words, which were reported to commander de Belloy, my naval attaché, by a Russian navy officer whom he had met in St. Petersburg, made clear to me the value of the “collaboration” we could expect from our great allies. Behaving as if we were the enemy, I do not doubt that this “ally” betrayed both his sovereign, who was more truthful than his ministers and generals, and the interallied cause; but he himself was betrayed by his own officers who, and I’m getting ahead of myself but have to say it, informed us without asking anything in return for his mischievous plans. In the day just after his arrival, the informant of commander de Belloy reported to him these instructions given to the senior officers of his mission: «Do not forget that the primary objective of our mission is to hinder the success of the French mission. »

Nothing could have contributed more to the popularity of our mission than Russian enmity. General Berthelot, who immediately saw the bright side of things, was enjoying it and was not at all amazed. When I repeated the words of General Belyaev about the usefulness of his ample waist, he burst into a laugh that shook his belly, the target of those statements. «I will invite him to dinner», he said, «I will give him the best wines and the best champagne. In vino veritas, especially for these people, who tell the truth only when drunk. Maybe I can find what goes through his head, if he even has something in it. » General Belyaev, who was thin as a hermit and with a sallow face, disliked the head of our mission, even more so, as he was sickly in nature and envied him because of his strong health. […] The reports also said that after the loss of Bucharest, on the front covering the Galați railway, namely the sea connection with Odessa, the withdrawal of the Russian troops without even engaging the enemy forced the Romanian divisions that were overwhelmed to leave behind its artillery batteries so as to get out of the encirclement.

«The Russians triumphed over this new Romanian defeat»

They said that, because the Romanian army lost most of its combat value, and Moldovia’s defence fell exclusively on their charge, especially now that they had two new armies here, they had the right to exercise supreme command over these forces, that were under the nominal authority of King Ferdinand. But General Sakharov, the supposed deputy of the king, actually had the reigns, while General Berthelot, stripped of his official role, was relegated to the position of «inspector of the rebuilding of the Romanian troops». The King told him, with an embrace: «In our hearts you climbed up a rank». Berthelot will soon get a bloody revenge. […]

As early as January, General Sakharov, on a threatening and cunning tone, insisted that all the units reconstituted under the control of General Berthelot to cross the Prut and to be stationed on Russian territory. «They will have there a much better life, he said, as they will not hamper with their presence in Moldavia the movements of the Russian armies and will be protected against the physical and moral contamination by a population befallen to typhus and defeatism, this typhus of the soul». He could not, however, know that the soul of the dying and starving Romanians was healthier than that of his overstuffed general staff. The King opposed to this request in a categorical manner. He says he will not separate himself from his army and that he prefers to starve on Romanian soil rather than to be fattened in Russia. He was trying to suggest to General Sakharov that his phony solicitude for the Romanian army unsuccessfully masked this hidden thought: to get rid of any annoying witnesses and to seize for Russia the large quantities of arms sent by France to Romania via Arhanghelsk. For our part, General Berthelot and myself, especially by indirect means, press campaigns and through the intervention of the French General Staff at Stavka (the Russian high command), we were fighting as well against a plan directed by the Russians against France, to deprive it of a strong means to conclude the peace by continuing the war: a 500.000 strong Romanian army reorganized by its officers in a part of Europe where our great ally claims military and political supremacy.

The Russian plan provoked the unanimous revolt of the Romanian national sentiment, not only in the people, but as well in the sovereign the members of the government and parliament, assembled in Iași since December. […] Meanwhile, at the beginning of February, we were in one of the worst moments of the war, as an interallied conference began in Sankt-Petersburg that made us wonder if it will be the last blow to the alliance. The official reason for this conference was the coordination in 1917 of operations on the Eastern Front and those on the Western Front. […]

I was thinking that I would better defend France’s position by limiting it, through the presence of General Berthelot, to the military field which, in the present case, dominates the political one. I knew, moreover, that the head of our military mission, in full understanding with me, would defend it with as much firmness as possible. He defended it so well during passionate talks that the representative of the Russian high command, General Gurko, reproaches him that «he was more Romanian than the Romanians». «No, General Berthelot replied, but I am a French man, and in this matter my country’s interests are the same as Romania’s. » He adds, laughing, «I even wonder if I’m not more of a Russian than you, because the interests of all the Allies, even those of Russia, are the same as those of Romania. » Bertherlot won this time, namely in keeping the Romanian army on its national territory.”