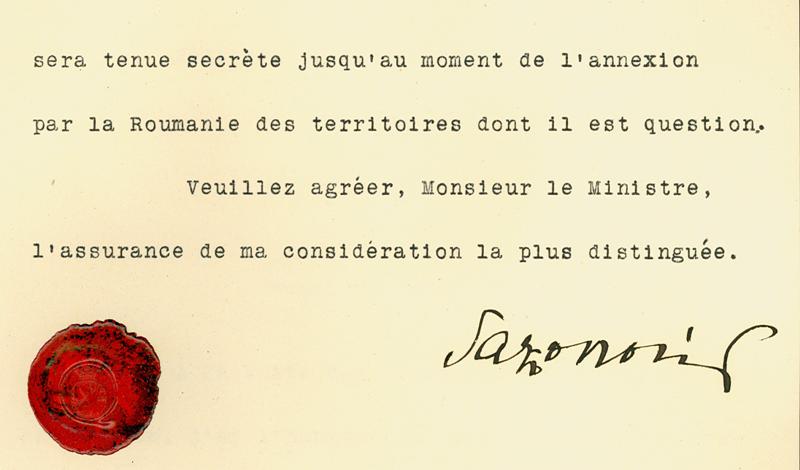 The reorientation of the Romanian foreign policy was initiated even before the outbreak of the First World War, at the initiative of the Liberal government in Bucharest. Romania had signed a secret treaty in 1883 with the Central Powers, but this agreement hindered the achievement of its main national goal: the liberation of the Romanians from Transylvania and Bukovina, provinces that were a part of the Austro-Hungarian Empire. Achieving this goal was only possible through an alliance with the Entente.

The negotiation of an alliance treaty with the Entente proved to be an extremely complex and lasting process. Throughout the period of neutrality (1914-1916), negotiations were conducted with the powers of the Entente, almost without interruption. Two days after the Crown Council in Sinaia (21 July 1914), where the issue of Romania’s entry into war was discussed, the Romanian ambassador in St. Petersburg, Constantin Diamandy, informed Bucharest that he had received a draft from the Foreign Minister of the Russian Empire, Sergei Sazonov, for a Russo-Romanian convention. This document was the result of long talks between the Romanians and Russians, prior to the declaration of Romania’s neutrality, signalling a reorientation of Bucharest’s foreign policy prior to the beginning of the First World War.

Diamandy’s previous correspondence with Romanian Foreign Minister Emanoil Porumbaru provides clues about the negotiations on this convention. On July 14, 1914, the Romanian ambassador in St. Petersburg informed Bucharest that he communicated to Sazonov the contents of the cipher telegram he had received from Premier Ion I.C. Brătianu, and that the Russian Foreign Minister was “very satisfied”.

The draft of the Romanian-Russian Convention

On July 23, Diamandy announced: “Today, […] I had a meeting with Mr. Sazonov. He has given me the draft of the Russo- Romanian Convention, to which a map will be attached”. Inquiring on how the text of the Convention will reach Bucharest, the Romanian ambassador in St. Petersburg proposed to bring it personally as he could also provide any necessary explanations.

However, Diamandy’s departure to Bucharest was postponed due to the outbreak of war between Austria-Hungary and Serbia while Sazonov insisted that the text of the agreement be telegraphed to the Romanian government.

The draft proposed by the Russians provided for Romania’s military co-operation with Russia, against Austria-Hungary, to “maintain the Balkan balance of power” considering that aggression on Serbia “tended to compromise this balance”. The text of the draft had three paragraphs, which provided for Romania’s engagement with all of its forces in the war, in cooperation with Russia, against Austria-Hungary, starting with the signing of the agreement.

In return, Russia assumes its obligation “not to end the war against Austria-Hungary before the territories of the Austro-Hungarian monarchy inhabited by the Romanian population are reunited with the Crown of Romania”. The boundaries of these territories were to be established according to the ethnic principle. Romania was required not to conclude peace with Austria-Hungary without Russia’s permission. The agreement would remain in force until the peace between Russia and Austria-Hungary was concluded.

In the initial form of the draft, the Russian government firmly ruled out the idea of ​​Romania’s neutrality. Russia’s initiative of military co-operation with Romania was first viewed with scepticism by France and England, given Bucharest’s close relations with the Central Powers and the fact that Romania’s throne was occupied by a German king, thought to be loyal to the commitments made to his country of origin. On July 27, Sazonov urged the Western allies to formally adhere to the draft convention, but the governments of Paris and London considered it a precipitated action.

The proclamation of Romania’s neutrality following the Crown Council in Sinaia was received with disappointment in St. Petersburg, but the Russian government did not give up on trying to get Romania to join the Entente. In a series of telegrams sent to the plenipotentiary minister of the Russian Empire in Romania, Stanisław Koziełł-Poklewski, in early September, Sazonov insisted that he explain to the government in Bucharest that Russia supports the achievement of Romania’s national aspirations if the country enters the battle against Austria-Hungary.

On September 13, Sazonov sent a new proposal to the Romanian government relating to the possibility of a favourable neutrality of Romania towards Russia. The Romanian Prime Minister told Koziełł-Poklewski that he accepted Sazonov’s proposals under certain conditions. Ion I.C. Brătianu wanted Russia to guarantee Romania’s borders at that time, as well as the delimitation of a future frontier in Bukovina according to the province’s historical realities. Also, the Romanian prime minister called for the agreement to remain secret.

On September 18, diplomatic notes were exchanged between Sazonov and Diamandy, which represented the de facto conclusion of the Russo-Romanian secret agreement. The document noted that “Russia is committed to oppose any violation of Romania’s territorial status-quo. It also obliges itself to recognize Romania’s right to annex the parts of the Austro-Hungarian monarchy inhabited by Romanians”. Russia also committed itself to obtain recognition of this agreement by the governments of Paris and London.

In his response to Sazonov’s note, Diamandy mentioned that “in return, I am authorized by Mr. Brătianu […] to tell you that Romania undertakes on her part to maintain a friendly neutrality towards Russia until the moment it will occupy the parts of the Austro-Hungarian monarchy inhabited by Romanians”.

By the “friendly neutrality” mentioned in this agreement, the Russian government understood the ban on arms transport to the Central Powers through the territory of Romania, but facilitating such transports from Russia to Serbia. Russia’s commitment to recognize “Romania’s right to annex the parts of the Austro-Hungarian monarchy inhabited by Romanians” was of a diplomatic nature, but Sazonov did not rule out military support if Romania decided to enter into a war against Austria-Hungary. However, this support would be negotiated when Romania made a decision in this respect.