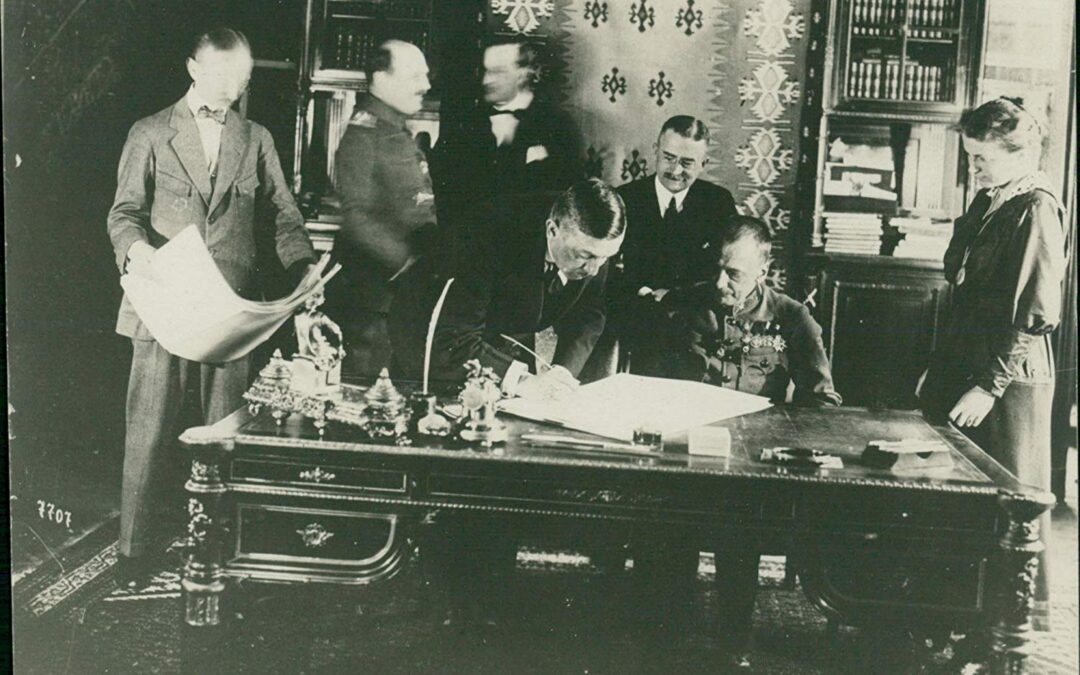 Between July and August 1914, the Austro-Hungarian ambassador to Bucharest, Count Ottokar Czernin, had an intense correspondence with his superior in Vienna, Count Leopold Berchtold, Foreign Minister of Austria-Hungary. Berchtold informed Czernin about the events in Vienna, about the crisis triggered by the Sarajevo incident, and asks the latter to make all the efforts to obtain Romania’s support in the upcoming war.

On July 22, Count Berchtold sent a telegram to the Austro-Hungarian ambassador in Bucharest informing him that Vienna would give an ultimatum to Serbian authorities the next day. The Minister of Foreign Affairs of Austria-Hungary told Czernin to inform the King of Romania, Carol I, and Prime Minister Ion I.C. Brătianu about this ultimatum but in a “strictly confidential” manner, by virtue of the secret treaty of alliance between the Central Powers and Romania.

“I ask Your Excellency to confidentially communicate to His Majesty the King and Mr. Brătianu, that the minister [the Austro-Hungarian ambassador] […] to Belgrade was ordered to remit Thursday, the 23rd  of this month, in the afternoon, to the Serbian government, a note, by which it requested the acceptance of several demands in 48 hours, which we have been forced to make, both as a result of the incident in Sarajevo, but also due to the conviction that we must put an end to the agitations of the provinces at the border, agitations that have been instigated by Belgrade for years. The two-day term is necessary to avoid the usual and unacceptable Serbian policy of stalling. The respective notification of the Signatory Powers will be made on the 24th of the current month. On that day Your Excellency will be in a position to give the Romanian Government the exact knowledge of the contents of this note. In the conversation you will have, you will express your hope that the Serbian government will accept our just and justified demands”.

On July 26, Berchtold informed Czernin that Serbia rejected the ultimatum and asked the ambassador to communicate to King Carol I that Vienna expected Romania to remain neutral in the war with Serbia. Also, in the case of Russia’s intervention in the conflict, Berchtold stated that Austro-Hungary relied on “Romania’s loyal cooperation”.

“Serbia has rejected the requests we have made. As a result, we broke off diplomatic relations with this country. Your Excellency will communicate to His Majesty the King this fact and will show on this occasion, that His apostolic Majesty’s love for peace,  […], our gracious Sovereign, as well as his exemplary sense of responsibility, known to His Majesty the King, offers convincing evidence that the peaceful means which the Monarchy could have used were exhausted. In its conflict with Serbia, Austria-Hungary does not pursue selfish interests for the Monarchy; on the contrary, it is about safeguarding its territory from a neighbour whose entire policy is aimed at breaking up and apart our provinces at the border. This must be put to an end. We do not intend to make territorial acquisitions in Serbia; but we hope that if the war breaks out, it will remain localized. From our ally and the High Wisdom of the King, we expect Romania to maintain the strictest neutrality. We, in remembrance of our alliance obligations, will not take, in the subsequent course of the events, any decision that could harm the interests of Romania, without having contacted her before. If Russia were to aggressively act against us, we would count on Romania’s loyal cooperation as our ally. In your talk with the Prime Minister, Your Excellency will also be inspired by the above considerations”.

“Unfortunately we could not count on Romania’s military support”

Two days later, Czernin communicated to Berchtold the result of his meeting with King Carol I, which took place that day in Sinaia:

“I executed the orders I received, namely in a conversation with the King himself. The result of the discussion is as follows:

I. In a war between the Monarchy and Serbia, His Majesty guarantees the strict neutrality of Romania.

II. Of the promise of Your Excellency that “we, in remembrance of our alliance obligations, will not take in the subsequent course of the events any decision that could harm the interests of Romania, without having contacted her before” His Majesty took note with satisfaction.

III. Should Russia act against us, the King told me that unfortunately we could not count on Romania’s military support.

The King, while saying these words was moved like never before, and he assured me that if he could follow his heart, his army would fight on the side of the Triple Alliance. But he cannot. In a year so much had changed that he is unable to respect the treaty. He asked me, however, to announce Your Excellency, that in the conflict with Russia he will maintain strict neutrality and that no power in the world could ever cause him to take up arms against the Monarchy”.

On August 4, Czernin informed Berchtold about the Crown Council held in Sinaia on the previous day, which decided to proclaim the neutrality of Romania:

The same day, a telegram from the Foreign Minister of Austria-Hungary asked Count Ottokar Czernin to immediately inform the Romanian Prime Minister that “the Central Powers appreciates the decisions of the Crown Council”:

“In full agreement with the Berlin Cabinet, I ask Your Excellency to notify Mr. Brătianu, that the two Central Powers appreciate the decisions of the Romanian Crown Council, that they consider them as corresponding to friendly relations, and that Romania is still regarded as their ally. In the future, we will therefore take the Romanian interests into account, and we expect with confidence that Romania will guard its borders in Moldavia and oppose an eventual invasion of Russia”.