The Serbian invasion of Banat (II) 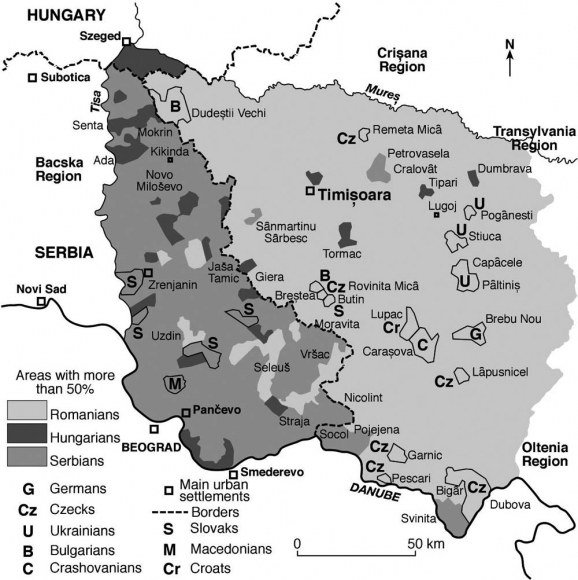 Just a few days before the end of the First World War, newly liberated Serbia sent its units to occupy Banat, taking advantage of the collapse of the Habsburg Monarchy. On November 15, 1918, the Serbs marched into Timișoara, inaugurating two and a half months of repressive regime against the Romanian majority population.

Despite the fact that Serbian territorial claims had no basis, the 1916 Treaty of Bucharest, which assented to Romania’s rights over Banat, was not recognized, due to the signing of a separate peace with the Central Powers in 1918. Even Romania’s status as an ally was questioned at the beginning of the peace negotiations. These injustices and other broken promises strengthened I.C. Brătianu’s determination, head of the Romanian mission in Paris.

Intransigent during the negotiations, he sanctioned the abuses of the Great Powers, protesting against the decision to not let Romanian delegates participate in the debates, the entire decision-making process being in the hands of the Big Four.

During the proceedings, I.C. Brătianu demanded that the 1916 treaty be honoured, by which the entire Banat was to be incorporated into the Romanian state, with its western border reaching the Tisza.

The Serbs re-evaluate their demands

Serbian officials had to give up their exaggerated claims on the entire Banat, taking into account the undisputed Romanian majority, 582.000 compared to 263.000 Serbs. But they remained vocal in claiming the western part of Banat, taking advantage of the sympathy that the Great Powers had for them.

Romanians and Serbs stand firm in their demands

The solution of arbitrarily dividing the Banat was unequivocally rejected by the members of the Romanian delegation.The Serbs were also reluctant to give up on their compatriots, a position also adopted by Romania’s representatives, especially since around half a million Romanians were living in Torontal and the Timoc valley.

Even so, such a partition would have suffocated the economic potential of the region, because the mining and industrial east was to be separated from the agricultural west.

The Serbs argued for their strategic interests in the region, as Romania’s borders would have been too close to the capital, Belgrade.In the event of a conflict, they feared that the city was far too exposed and vulnerable to an advance by the Romanian armies. The Great Powers, when they signed the treaty of alliance in 1916, also noticed this problem.Precisely because of this, when they promised the Banat to Romania, they imposed by the same treaty not to build fortifications and other military installations at a certain distance from the border.

The Great Powers and the Romanians’ persistence

In this context, the fact that the Big Four did not reject the Serbian claims outright shows us how tense interallied relations were, especially because of the persistence of the Romanians in pursuing their own national goals.Such behaviour on the part of a small state was unprecedented, greatly irritating the Great Powers.

The president of the US delegation, Robert Lansing, supported the Serbian claims. He was of the opinion that the Romanian state should cede not only significant parts of Banat to the Serbs, but also Southern Dobruja to the Bulgarians.

During these discussions there was also talk about a possible exchange of territories. The Serbs gave up their claims on Banat if the Romanians ceded Southern Dobruja to the Bulgarians. As compensation, the Serbs would receive Vidin from the Bulgarians. This option was not accepted either.

The Big Four had no more patience for I.C. Brătianu, who had until then blocked any compromise solution, the discussions seeming to have no concrete end.

For this reason, on May 23, 1919, the matter was settled by the representatives of the Great Powers. Banat was to be divided, with two thirds going to Romania. The decision was made known on June 13, 1919 to the Romanian and Serbian representatives. In protest, I.C. Brătianu left the Peace Conference.

The decision was deeply dissatisfying, but the warnings coming through diplomatic channels showed that Romania would also lose any piece of goodwill that the Great Powers still had. Finally, the Romanian government acquiesced.

On July 21, Romanian soldiers begin to occupy the eastern  part of Banat and on August 3rd they entered Timișoara. Even though the surrender of the entire territory would have counterbalanced the number of ethnic Serbs and Romanians living in each country, this arbitrary division meant that another 100.000 Romanians were now under Serbian rule.

In this way, the Serbs owned not one, but two important Romanian enclaves at the border, and subsequently tried to reduce the numerical impact of this minority using flawed statistics, differentiating between Vlachs and Romanians.