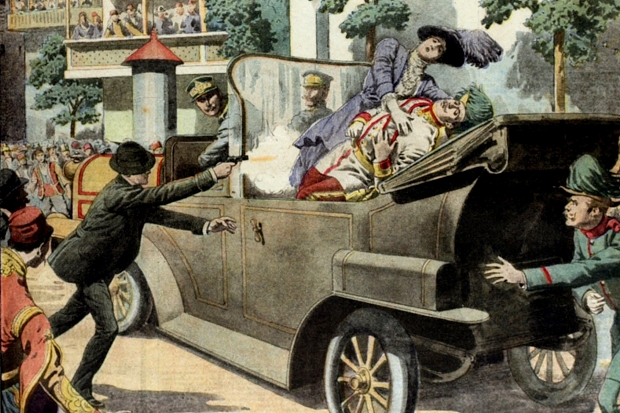 Deeply in love, Ferdinand chose to marry Sophie Chotek in 1900 despite the opposition of his uncle, Austro-Hungarian Emperor Franz Josef, who refused to attend their wedding. Though not exactly a commoner, Sophie came from a family of obscure Czech nobles and not from a reigning or formerly reigning dynasty of Europe. As a result, her and Ferdinand’s children were declared ineligible for the throne. Sophie also became the victim of countless petty slights. At imperial banquets, for example, she entered each room last, without an escort, and was then seated far away from her husband at the dinner table.

His marriage notwithstanding, Ferdinand remained Franz Josef’s heir and inspector general of the army. In that capacity, he agreed to attend a series of June 1914 military exercises in Bosnia-Herzegovina. Austria-Hungary had just annexed these provinces a few years earlier against the wishes of neighboring Serbia, which likewise coveted them. Ferdinand believed the Serbs to be “pigs,” “thieves,” “murderers” and “scoundrels.” Yet he had opposed annexation for fear that it would make an already turbulent political situation even worse. Formerly controlled by the Ottoman Empire, Bosnia-Herzegovina’s population was roughly 40 percent Serb, 30 percent Muslim and 20 percent Croat, with various other ethnicities making up the remainder.

Upon learning of Ferdinand’s upcoming visit, the Young Bosnians, a secret revolutionary society of peasant students, began plotting to assassinate him. In May, Gavrilo Princip, Trifko Grabez and Nedeljko Cabrinovic traveled to the Serbian capital of Belgrade, where they received six handheld bombs, four semi-automatic pistols and cyanide suicide capsules from members of the so-called Black Hand, a terrorist group with close ties to the Serbian army. After practicing with their pistols in a Belgrade park, the three men journeyed back to Bosnia-Herzegovina, receiving help from Black Hand associates to smuggle their weapons across the border. To this day, it remains unclear whether the Serbian government participated in the scheme.

Ferdinand and Sophie departed their estate for Bosnia-Herzegovina on June 23. Having received multiple warnings to cancel the trip, the archduke knew that danger potentially awaited them. “Our journey starts with an extremely promising omen,” he purportedly said when the axles on his car overheated. “Here our car burns, and down there they will throw bombs at us.” After arriving at a spa town a few miles outside of Sarajevo, Bosnia-Herzegovina’s capital, Ferdinand attended two days of military exercises while Sophie visited schools and orphanages. On a whim, the couple drove in one evening to check out Sarajevo’s bazaars. While there, they attracted a crowd of onlookers, including Princip, but were apparently treated with warmth and politeness.

Following a banquet with religious and political leaders, only one day of events remained before Ferdinand and Sophie were to return home. That morning, June 28, the archduke sent a telegram to his eldest son congratulating him on his latest exam results. He and Sophie then boarded a train for the short ride into Sarajevo. For once, Sophie was permitted to walk alongside Ferdinand during a brief troop inspection, after which the couple got in an open-topped car for a motorcade ride to city hall. The car in front of them was supposed to carry six specially trained officers but instead had only one, plus three local policemen. In fact, throughout the trip, Austro-Hungarian officials allegedly focused more attention on dinner menus than security details.

Meanwhile, seven Young Bosnians had fanned out along the Appel Quay, a main avenue in Sarajevo running parallel to the Miljacka River. When the motorcade passed by, its route having been published in advance, Cabrinovic asked which car carried the archduke. He then hurled his bomb at the car, only to watch it bounce off the folded-up roof and roll underneath the wrong vehicle. The subsequent explosion wounded two army officers and several bystanders but left Ferdinand and Sophie essentially unharmed. Cabrinovic jumped into the mostly dry riverbed and made a half-hearted attempt to kill himself before being apprehended. “I am a Serbian hero,” he purportedly shouted as the police led him away. At least two other Young Bosnians also had good looks at the archduke but apparently lost the nerve to attempt an assassination.

Rather than immediately flee Sarajevo, Ferdinand decided to continue on to the planned event at city hall. Upon finishing that up, he insisted on visiting the wounded officers in the hospital. In order to dissuade any other bomb throwers, the motorcade zipped down the Appel Quay at high speeds. By mistake, however, the first three cars turned onto a side street right where Princip happened to be standing. As the cars attempted to reverse back onto the Appel Quay, Princip whipped out his pistol and fired two shots at the archduke from point-blank range, piercing him in the neck and also striking Sophie’s abdomen. “Sophie, Sophie, don’t die—stay alive for our children,” Ferdinand murmured. Within minutes, though, both had passed away. Princip, a slender, 19-year-old Serbian army reject, later admitted to killing Ferdinand but said he had not meant to hit Sophie. Three weeks too young for the death penalty, Princip was given a 20-year sentence, but contracted tuberculosis and died in jail in April 1918, at the age of just 23.

With tensions already running high among Europe’s powers, the assassination precipitated a rapid descent into World War I. First, Austria-Hungary gained German support for punitive action against Serbia. It then sent Serbia an ultimatum, worded in a way that made acceptance unlikely. Serbia proposed arbitration to resolve the dispute, but Austria-Hungary instead declared war on July 28, 1914, exactly a month after Ferdinand’s death. By the following week, Germany, Russia, France, Belgium, Montenegro and Great Britain had all been drawn into the conflict, and other countries like the United States would enter later. Overall, more than 9 million soldiers and nearly that many civilians would die in fighting that lasted until 1918.