The start of the Battle of Mărășești 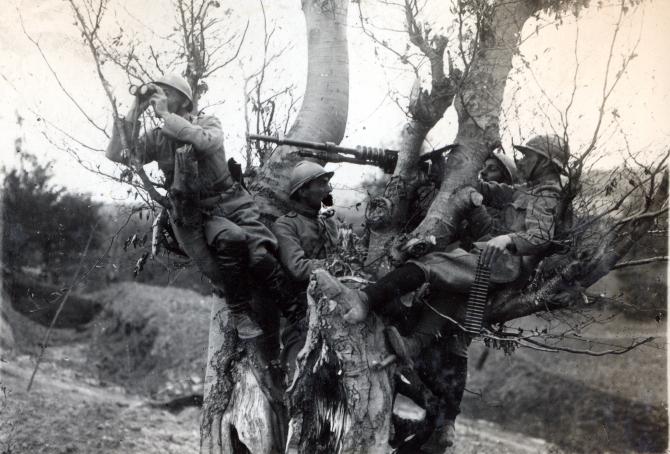 On August 6, 1917, at half past four in the morning, a powerful three-hour artillery barrage, including asphyxiating gas, carried out by the German First Corps, led by Curt von Morgen of the Ninth Army, signaled the start of the Battle of Mărășești.

The Ninth Army’s plan for what was to become known in history as the Battle of Mărășești envisioned an attack on a 40 km wide stretch defended by the Russian Fourth Army on a distance of 40 kilometres. After bypassing the Russians, Mackensen’s forces had to attack the left flank of the Romanian Second Army. At the same time, the right flank of the Romanian Second Army was to be attacked by the Gerok Group. Once the Romanian Second Army was eliminated, a bridgehead over Siret would be established in the vicinity of the Mărășești-Tecuci line. What the Germans did not know was that these Russian divisions were to be transferred to Bukovina, being replaced by Romanian divisions. However, the Romanian units only started moving towards the front on August 5 and were still to the east of the Siret River when the attack began. The Germans expected to meet only “undisciplined, exhausted Russian troops, who would not resist”.

The following day, on August 7, the Germans resumed the attacks, but units of the Romanian 9th Division crossed the Siret. The operative command of both the Romanian divisions and the Russian 34th Division is entrusted to Romanian General Eremia Grigorescu, commander of the Romanian Sixth Corps. The 5th Division suffered heavy losses; of the 15.000 soldiers, only 3.500 remained combat ready.

On August 8, German troops start their attack along the Focsani-Mărăşeşti railway line, but the defenders (the Romanian 5th Division and the Romanian 9th Divisions together with the Russian 71st Division, which had come to replace the 34th Division, which was practically decimated) resisted fiercely. After three days of fierce fighting, the results were not up to the expectations of the German High Command. The losses of the First Reserve Corps were very high, and the much-anticipated breakthrough had not yet been achieved.

On August 9, the German 18th Corps enters the fray alongside the German 115th Division and the Austrian 62nd Division. Following a Russian counterattack, the Austrian command warned about “the disappearance of 2.500 people who probably went over to the enemy”. That is why the pressure moves to the section of the front covered by the Ninth Army, where the series of German attacks and the Romanian counterattacks continue. Under constant pressure, the 9th Division and the 5th Division withdrew north of the Tecuci-Mărăşeşti railway.

The Russians tried a new counter-offensive, but under the pressure of the Germans they had to withdraw. General Alexander Ragoza, commander of the Russian Fourth Army, eventually decides to cancel the counter-offensive without prior warning. In the meantime, fierce Romanian attacks are stopped by heavy machine gun and artillery fire. The 34th Regiment, which started with 3.000 men is reduced in just two days to 4 officers and 250 soldiers. A Romanian regimental commander reports that “any attempt to advance is useless, the men are slaughtered pointlessly”. The Romanian 5th Division has a similar fate. The losses suffered by the Romanians on August 10 were serious: nearly 5.000 men, including 1.500 prisoners, were lost in one of the bloodiest days of the Battle of Mărășești. The Germans suffered too: the 89th Division, with only half of its men surviving, had to be withdrawn.

Pressured by their respective commands, and despite the losses suffered, General Christescu and General Ragoza decide to resume the offensive. During the morning artillery preparation, Ragoza had second thoughts and eventually changed his mind. He thought the losses were too high, that the men were exhausted and that he doesn’t have enough reserves. The Romanian troops began their attack as scheduled, but had to withdraw, seeing the Russian lack of support. Von Morgen reacts quickly and attacks the junction between the Romanian 9th Infantry Division and the Russian 71st Division. Under the pressure of the 12th Bavarian Division, the Russian soldiers start their retreat: “You could see groups, groups of Russians, running northward through the vineyards to the left of the road.” German troops attacked the units of the 9th Infantry Division from the rear, near the railway station and village of Mărășești. The 40th Regiment is almost decimated: “The Germans captured seven officers and 120 soldiers. The rest remained on the battlefield, dead and wounded”. Von Morgen’s forces positioned themselves in the southern and south-western extremities of the city, with its artillery prepared to fire.

However, after a week’s worth of fighting, the Germans were exhausted and did not have enough reserves at their disposal. On the Romanian side, in spite of appalling losses (nearly 12.000 men) there were four other divisions that were on their way. Starting with August 11, for nearly a week, the battle continued, but lessened in its intensity.