The story of the aviator who died in anonymity after flying at -40 degrees with the documents of the Great Union on December 1, 1918 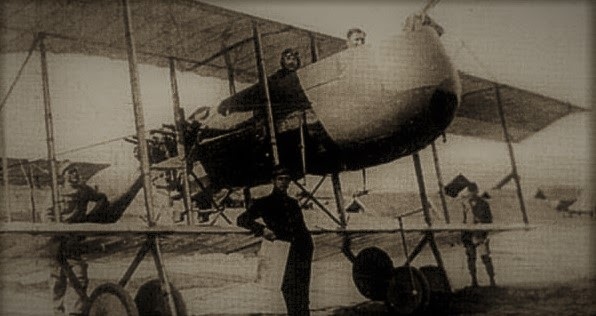 In the afternoon of November 23, 1918, on the Liberty Plain of Blaj, a flying machine piloted by a forgotten hero, a watchmaker unknown to anyone, brought a message of peace, a sackful of manifests and a sealed bag, which contained, among other documents, the letter from Prime Minister Ion I.C. Brătianu for the Central Romanian National Council.

Neglected by Romanian history, a man sleeps his eternal slumber in a tomb in Rădăuţi. On his cross a name is etched, Vasile Niculescu. He was a common man that through his actions became a hero, but then was forgotten, passing into oblivion. His life, that of a movie script.

At the Rădăuţi cemetery, the only one in Romania which is crossed by a railway, there is a grave dating from the spring of 1981, and on its cross the name Vasile Niculescu is written. He was a watchmaker who died discreetly, in anonymity, at the age of 90. Nevertheless, his story is strongly linked to one of the most important moments in Romanian history, December 1, 1918, at a time when Vasile Niculescu was an aviator.

On November 23, 1918, a plane piloted by Vasile Niculescu and captain Victor Precup left from Bacău and headed to Blaj, more precisely to the Liberty Plain, to deliver, ahead of the Great National Assembly in Alba Iulia on December 1, 1918, the documents that expressed the desire of the Romanian people to be united in one country with their brothers from across the Carpathians. Not only that, but the harsh winter meant that the Romanian government in Iași and the Central Romanian National Council could only communicate by airplane so their mission was all the more important.

On the plane that landed in the afternoon of November 23 on the Liberty Plain, there was a sackful of manifests and a sealed bag containing, among other documents, a letter from Prime Minister Ion I.C. Brătianu to the Central Romanian National Council. The flight was done at an altitude of 2.600 meters with a Farman 40 no. 3240. Every crew member had their face protected by a thick layer of paraffin, the only way to survive at -40 degrees Celsius. The pilots had neither parachutes nor armaments, and the cockpit had been open throughout the flight.

When they arrived, the crowds cheered them on, as the brave men went to the Metropolitan Palace. The plane was guarded by eight National Guard soldiers, in eight-hour shifts. It was so cold that they warmed themselves by the fire, next to the plane.

At six o’clock in the evening, the Patria restaurant hosted a festive meeting and there Vasile Suciu, president of the Romanian National Council of Blaj, announced that the Niculescu-Precup crew would return to Bacău to report that the Romanians in Transylvania would unite with their motherland. In the meantime, at the Metropolitan Palace it was decided that a Great National Assembly would be held in Alba Iulia on December 1.

On departure, the plane was carrying an official document, the consequence of which was the most important event in Romanian history, the unification of all Romanians. The people that gathered also expressed their joy in a very unconventional way: by putting their signatures on the canvas of the airplane.

For his bravery and contribution in shaping the future of Romania, everyone expected that Lieutenant Vasile Niculescu was to be awarded the Order of Michael the Brave, Third Class. However, that never happened. The hero’s memory slowly faded, as he changed several cities and was rejoiced and saddened by his anonymity. He is mentioned sometimes in aviation literature, but history books have all but forgotten him.

In the summer of 1919, less than a year after his historical flight, Vasile Niculescu was once more tested by destiny. On June 23, the plane he was flying during a reconnaissance mission in Transnistria crashed behind Bolshevik lines and he was taken prisoner and sent to Odessa, but he was freed a month later.

He lived the last two decades of his life in Bucharest in complete anonymity. Only in 1961, in December, he apparently had received a letter from Andrei Popovici, the former commander of the 2nd Tecuci Aeronautical Group, who remembered the famous and extraordinary episode.

“There is no Christian and national holiday that doesn’t remind me of your flight to Blaj, at the onset of winter, in 1918. This flight remains inscribed in the history and annals of the Romanian nation. Your brothers in arms have seated you on the highest pedestal of our aeronautical endeavours from that great and holy war. The injustice of the country’s rulers of that time was plain to see, not to give you the due honour for that historic flight. I do not know why, but I still haven’t lost the hope that I will someday witness the glory and justice that is rightfully yours.”