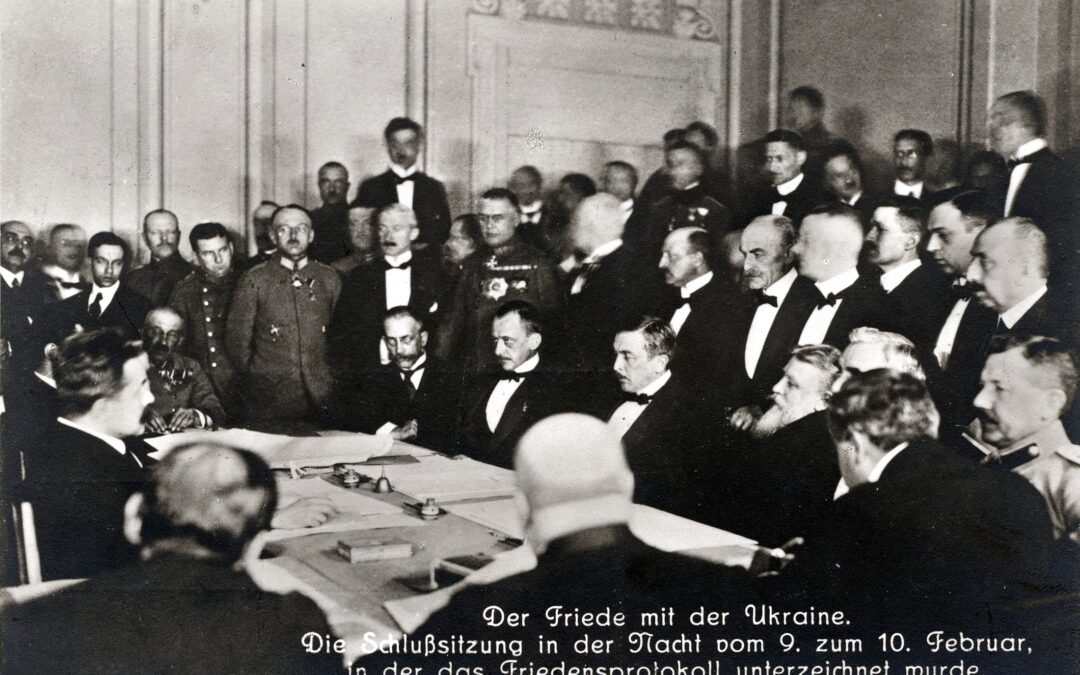 One week after the signing of the armistice between Russia and the Central Powers, negotiations between the two sides for the signing of a peace treaty began in Brest-Litovsk. The Bolsheviks successfully insisted that the talks be public, something never seen before in diplomacy. Moreover, the Bolsheviks prepared some less pleasant surprises for the representatives of the Central Powers.

On December 22, 1917, when negotiations began for an armistice in the fortress-city of Brest-Litovsk, no one could think that the talks would go beyond the diplomatic framework of the times, especially since the city was at that time the headquarters of the German army on the Eastern Front. However, the Russian Bolsheviks were more than determined to achieve their goals. The conference was a diplomatic confrontation between the old imperial forces and those of the Russian Bolsheviks.

The Central Powers were represented by 14 delegates (five Germans, four Austro-Hungarians, three Ottomans and two Bulgarians). Among the representatives of the Central Powers were Richard von Kuhlmann, Secretary of State of the German Foreign Ministry, Count Ottokar Czernin- the Austro-Hungarian Minister of Foreign Affairs, Talaat Pasha, but also other equally important representatives. In total antithesis to the delegation of the Central Powers was the Bolshevik one, which at first was led by Adolf Joffe and then by Lev Trotsky, who had just been appointed People’s Commissar for Foreign Affairs. The delegation led by Trotsky consisted of 28 members, including modestly dressed workers, soldiers, sailors, women and a peasant. The Germans and their allies had never seen such a thing in an official diplomatic meeting, but they were willing to go ahead with the talks, especially if they managed to achieve a rapid cessation of hostilities on the Eastern Front. One of the objectives of both Berlin and Vienna was to gain Ukraine’s independence in order to secure the supply of grain and ore for the Central Powers’ war effort. When German General Max Hoffmann, the chief of staff on the Eastern Front, revealed Berlin’s support for Poland’s, Lithuania’s and Courland’s right to self-determination, Trotsky felt outraged and threatened to disrupt negotiations. Talks resumed ten days later, after the Russian delegation consulted with the Petrograd government.

Disagreements between Lenin and Trotsky

Workers’ strikes broke out in Vienna, Berlin and Budapest, but they had a social substratum, doubled by the hardships caused by the war, and not ideological causes as the Russian Bolsheviks had hoped. Losing patience, the Central Powers signed a separate treaty with Ukraine on January 9th. According to this treaty, Ukraine agreed to the annual supply of several million tons of wheat to the Central Powers, in exchange for the recognition of the People’s Republic of Ukraine, which had recently declared its independence from Russia. Upon hearing the news, Trotsky stormed out of the conference and refused to start further negotiations. As a result, the Central Powers resumed hostilities, so that on February 18, 1918, one million German and Austro-Hungarian soldiers began to advance east, occupying Latvia, Estonia, Lithuania, but also part of Ukraine, including Kiev, on March 1. The occupation of Kiev convinced the Russian Bolsheviks to sign the Brest-Litovsk Treaty on March 3rd.

Lenin and Trotsky Russia’s lost 1.3 million square kilometres, a third of its pre-war population, 73% of its ore production and 89% of its coal production. It was Lenin who wanted peace no matter the cost, understanding that the survival of his regime depended on external peace. The peace with the Central Powers would give him the time to strengthen the dictatorship of the Russian Bolsheviks in the face of internal enemies.

The irony was that Russia’s release of hundreds of thousands of prisoners, especially those of the Austro-Hungarian army, unknowingly aided the Bolshevik cause. Some of the soldiers returning home were influenced by Bolshevik ideology and were to become the leaders of the Bolsheviks and Communists in Central and South-eastern Europe, such as the Austrian socialist Otto Bauer, the Hungarian Bela Kun and the Croatian sergeant major Josip Broz, who would become known as Tito.