The Ukrainian civil war and the claims of the leaders 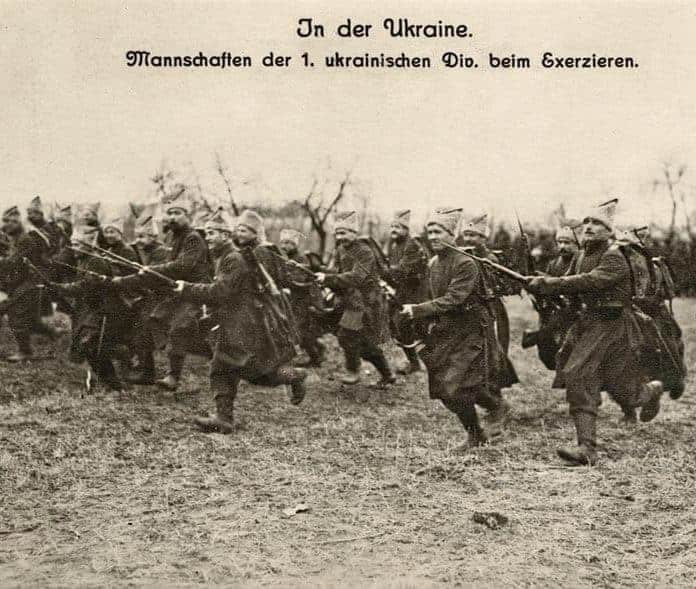 During the documentation about Ukraine and the civil war from 1917-1920 we found an interesting text about it. But are some comments and untruths the author support them. First of all that Bukovina isn’t a part of Ukrainian land. Bukovina is a historical region, variously described as in Central or Eastern Europe. The region is located on the northern slopes of the central Eastern Carpathians and the adjoining plains, today divided between Romania and Ukraine. This name came out in 1775. Until that moment didn’t exist. The name Bukovina came into official use in 1775 with the region’s annexation from the Principality of Moldavia to the possessions of the Habsburg Monarchy, which became the Austrian Empire in 1804, and Austria-Hungary in 1867. Second of all is not historically correct to claim regions or parts of land when you didn’t have stable any kind of border ever. Excepting this fact the article is interesting. Best part of it is about the chaos in space after Treaties of Brest-Litovsk 1918.

„At the beginning of the 20th century Ukrainian lands were part of the Austro-Hungarian (Galicia, Transcarpathia, Bukovina) and Russian (the nine right-bank and left-bank provinces) Empires. Therefore, with the beginning of the First World War Ukrainians were forced to fight on different sides of the Eastern Front. The 1917 February Revolution, as one of the consequences of the military conflict, led to the unleashing in Ukraine of the processes of nationhood and the conclusion of the formation of a Ukrainian nation.

At the beginning of the 20th century Ukrainian lands were part of the Austro-Hungarian (Galicia, Transcarpathia, Bukovina) and Russian (the nine right-bank and left-bank provinces) Empires. Therefore, with the beginning of the First World War Ukrainians were forced to fight on different sides of the Eastern Front. The 1917 February Revolution, as one of the consequences of the military conflict, led to the unleashing in Ukraine of the processes of nationhood and the conclusion of the formation of a Ukrainian nation.

Military Operations on Ukrainian Territory↑
The geopolitical position of Ukrainian lands and the considerable natural and human resources served as one of the reasons for the sharp struggle for it by Germany, Austria-Hungary, and the Russian Empire. One of the important theaters of military operations on the Eastern Front was the territory of Ukraine, primarily Eastern Galicia, Transcarpathia, Northern Bukovina, and the western part of Volhynia. This was the zone of operations of the Southwest Front, on which Russian troops fought against Austria-Hungary. In August and September 1914, Russian troops conducted the successful Galicia operation, occupying Galicia and Bukovina and the cities of L’vov and Chernovtsy[1]. A corps of Ukrainian Sich Riflemen in the Austrian 130th Brigade, which fought against the Russian army in the Carpathian passes[2], had already been created at the start of the war.

In January 1915 a new phase of the armed confrontation between the Austro-German and Russian troops began. In the course of the Carpathian operation Russian troops under the command of General Aleksei Brusilov (1853-1926) took Peremyshl’, one of the best fortresses of Europe, on 22 March 1915. Beginning in April 1915 Austro-German troops forced Russian armies out of the territory of Poland, Galicia, and Lithuania in the course of a general strategic offensive. On 22 June 1915 Austrian troops entered L’vov, and the front line consolidated along the line Kholm-Vladimir-Volynskii-Brody-Buchach.

From May to August 1916 Russian forces made a new attempt at an offensive known as the “Brusilov Offensive”, as a result of which Bukovina and part of Eastern Galicia were taken. At the beginning of 1917 German and Austro-Hungarian troops again began an offensive along the line L’vov-Galich-Stanislav-Chernovtsy. The front line stabilized, and the majority of West Ukrainian lands again ended up under Austro-Hungarian and German occupation. An offensive of Russian forces in the middle of July 1917, as a result of which the cities of Galich and Kalush were occupied, became the last military operation on Ukrainian lands. On 19 July 1917 the German command launched a counterattack, and the Russian armies retreated to the rear almost without resistance. The retreat ended on 28 July 1917. The front stopped at the line Brody-Zbarazh-Grimailov-the Dnestr River.[3]

Ukrainian Society in the Conditions of War and Revolution↑
The First World War severed social, economic, and spiritual ties, habitual social groups disintegrated, and human ethical, esthetic, legal, and common physiological norms and values changed. It can be said that Ukrainian society changed in both quantitative and qualitative terms. A considerable number of Ukrainians were torn from a familiar living environment. 4,500,000 Ukrainians fought in the Russian armies and 250,000-300,000 in the Austro-Hungarian armies. New social groups appeared, “displaced persons,”[4] refugees,[5] deportees, and more than 600,000 Austro-Hungarian and German prisoners of war[6] ended up on Ukrainian territory. At various times from 420,000 to 1 million refugees of more than twenty ethnic groups[7] were housed in the rear provinces of Ukraine. The local population was forced to coexist with these categories. Ukrainian society displayed examples of aid to “victims of war”, refugees in particular. On the other hand, the gradual growth of war fatigue provoked local social conflicts.

The lives of Western Ukrainians were fundamentally changed after Russian troops entered the territory of Western Ukraine. Part of the Ukrainians left their homes and were housed in special camps by the Austro-Hungarian administration: Wolfsberg, Gmind, and Grodig. More than 12,000 Ukrainians were deported deep into the Russian Empire. Among them were social and religious figures, for example, the historian Mikhail Grushevskii (1866-1934) and metropolitan Andrei Sheptitskii (1865-1944). With the unfolding of the revolutionary processes a radicalization of society and negative ochlocratic tendencies grew from 1917 to 1920, but the establishment of the Bolshevik government was accompanied by a spread of Red terror and repression.

The Ukrainian Revolution and Attempts to Create Independent Countries↑
The revolutionary events in Russia in February 1917 brought the development of analogous processes in its outlying lands of different ethnic groups. The period from March 1917 through October 1920 has been commemorated in Ukrainian lands as the period of the Ukrainian Revolution, as a result of which several attempts were made to create its own nation state. Three phases of revolutionary events stand out: firstly, the creation of the Ukrainian Central Rada (March 1917 – April 1918); secondly, the establishment of a Ukrainian State, or the Hetmanate of Pavlo Skoropadskyi (1873-1945) (the end of April to December 1918); thirdly the formation of the Directory, the course of the Civil War, and the coming of the Bolsheviks to power (January 1919 – October 1920)[8].

On 4 March 1917, a Ukrainian Central Rada (UTsR) was created in Kiev, an urban sociopolitical organization which was transformed into the leader of the Ukrainian national liberation movement. A well-known historian, Mikhail Grushevskii, was elected as its leader and sociopolitical figures Volodymyr Vynnychenko (1880-1951) and Sergei Efremov (1876-1939) as his deputies. On 15 June the first Ukrainian government was created, the General Secretariat. The UTsR published four legislative acts, “Universals”, regulating the change of the state legal status of Ukrainian lands. Whereas the First Universal (23 June 1917) declared Ukraine joining a democratic Russia with autonomous status, the Fourth Universal (22 January 1918) had already proclaimed the creation of an independent Ukrainian People’s Republic (UNR).[9] On 9 February 1918 the UNR and the countries of the Quadruple Alliance signed the Brest Peace Treaty. The phenomenon of the “Ukrainian Brest” is in the realization that it is “…the first peace in this horrible war.”[10] This treaty saved Ukraine from absorption by Soviet Russia and in exchange for military support from Austria-Hungary and Germany it was obligated to supply them with agricultural products. The UNR exhibited an inability to fulfill its obligations, and therefore the Austro-German command was interested in a change of government.

On 29 April 1918 the creation of a Ukrainian State or Hetmanate was proclaimed, with a monarchical form of rule headed by a hetman. He became Pavlo Skoropadskyi, a former general of the Russian army. The power structure under his leadership managed to achieve relative internal stability, adopt the first budget in the history of the country, normalize trade, and create some preconditions for economic recovery.[11] Considerable success was achieved in the area of the development of Ukrainian culture, education, and science, and attempts were made to create their own armed forces. A Ministry of Public Health and government foster care were created for the first time since the Empire, and the humanitarian problems of prisoners of war, war invalids, orphans, and refugees inherited from the Russian Empire and UNR were solved. At the same time a reactionary policy with regard to peasants and workers, and the presence of occupation troops led to an anti-hetman revolt.

A UNR was again proclaimed in Ukraine in the middle of December 1918. It was proclaimed by a collegial body, the Directory (Volodymyr Vynnychenko was the Chairman). In November 1918 a West Ukrainian People’s Republic (ZUNR) was created in western Ukrainian lands. On 22 January 1919 an “Act of Unification”, a declarative unification of the ZUNR and UNR into one state, was held in Kiev[12]. But in 1919-1920 the territory of Ukraine was turned into an arena of a new fierce military confrontation which led to the defeat of the Ukrainian Revolution.

The Consequences of the First World War for Ukraine↑
The First World War became the underlying cause of the social and humanitarian catastrophes which Ukraine endured in the 20th century. The tragedy of the Ukrainian people in the First World War was that the war turned the Ukrainian lands into a theater of military operations, and the population into participants of a fratricidal confrontation. The losses among the civilian population and those mobilized into the army, the economic devastation, and the fundamental social changes negatively influenced the living standards, led to the ruin of the patriarchal foundations of Ukrainian society, the loss of moral guideposts, and a search for an escape from the situation which had developed in the ideology of Bolshevism.

Nation states – the Ukrainian People’s Republic, the Ukrainian State, the West Ukrainian People’s Republic, and a number of Soviet puppet republics inspired by the Bolsheviks – were created on Ukrainian lands between 1917 and 1920. At the end of the First World War Ukraine became an arena of a civil war, an armed confrontation with the Bolsheviks, White and Polish armies, and the expeditionary corps of the Entente. International isolation, the internal confrontation between various social forces, and the immaturity of the Ukrainian nation led to the defeat of the Ukrainian Revolution and the inclusion of Ukrainian lands in four countries – the Soviet Union, Poland, Czechoslovakia, and Romania. But at the same time the period of 1917-1920 is assessed in contemporary research literature as a time of “a real energetic boom in the political, social, cultural, and military spheres”[13] of the Ukrainians who fought and sacrificed their lives in the name of Ukrainian independence.

This text is licensed under: CC by-NC-ND 3.0 Germany – Attribution, Non-commercial, No Derivative Works.