The unification of Bessarabia with Romania, an accomplishment made in the most difficult moment in the history of the Romanian state 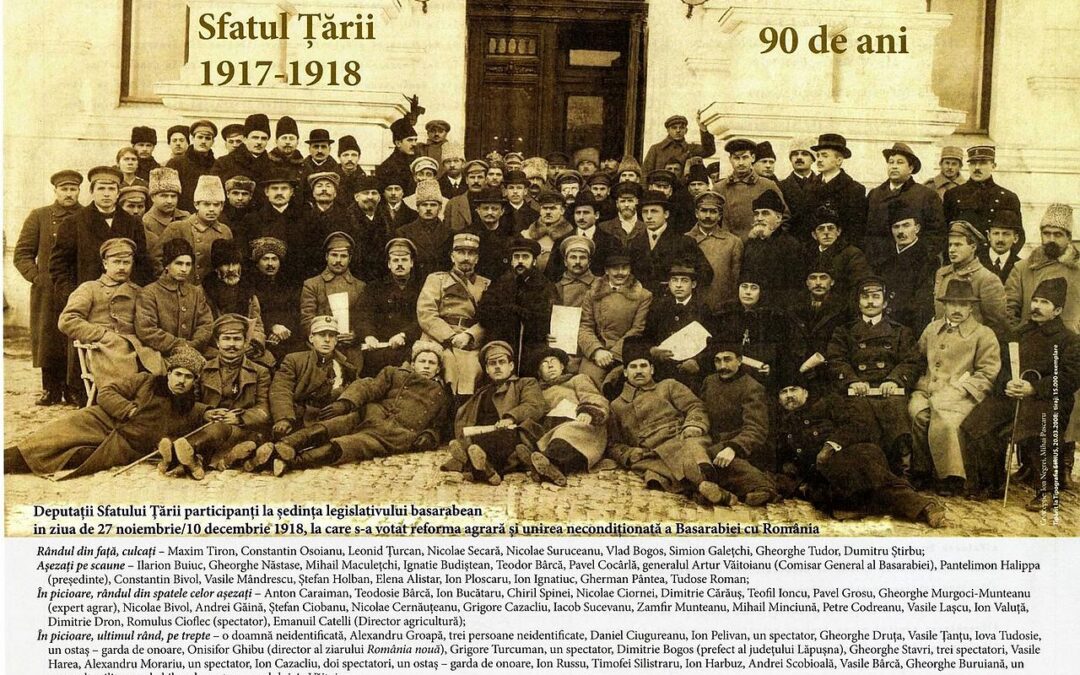 In the first two months of 1918, Romania and Bessarabia were subjected to great external pressures. Following the resignation of Prime Minister Ion I.C. Brătianu, General Alexandru Averescu was entrusted by King Ferdinand with the formation of a new Government on February 11 [N.S.]. Just two days before, the Ukrainian Parliament agreed to conclude a separate peace with the Central Powers, and the Russians interrupted the negotiations at Brest-Litovsk the next day. On February 18, the Central Powers denounced the truce with Russia, and German and Austrian troops invaded and occupied most of Ukraine, Belarus and the Baltic countries. Faced with the Central Powers offensive, the Bolsheviks had to sign the peace of Brest-Litovsk on March 3 under much worse conditions than those previously rejected, leaving Ukraine firmly in the sphere of German influence.

Losing its powerful Russian ally, Romania found itself in a very difficult position. The country was now surrounded, without support and without a way to withdraw further in, in case of defeat. In order to conclude a peace treaty with the Central Powers, Romania was pressed to accept extremely harsh conditions, from territorial concessions to the demobilization of the army and even the change of the dynasty was taken into consideration. Moreover, the issue of Bessarabia was complicated by the claims made by the government of Ukraine, which demanded to have a say in the peace talks of Buftea-Bucharest, between Romania and the Central Powers. Romania refused to discuss the issue of Bessarabia in these negotiations, and Germany showed no interest.

President Inculeţ and Premier Ciugureanu were informed by the Romanian authorities that Ukraine wants to represent the interests of Bessarabia in the negotiations. The Ukrainian claims had the effect of strengthening the conviction of many Bessarabians that the Moldavian Democratic Republic cannot survive as an independent state. The Bessarabian representatives proposed to Averescu the unification with Romania, but the general refused. As Ion Inculeț recalled: “fearing the loss of Dobruja in the Buftea negotiations, [Averescu] advised us to stay as an independent republic, so the Germans would not count the unification of Bessarabia as a compensation for Dobruja, which was claimed by Bulgaria”. In the talks held in Bucharest, the German representatives first sought to obtain economic compensation from Romania, so they did not hesitate in rejecting the territorial claims of Ukraine on Bessarabia and of Bulgaria concerning the entire territory of Dobruja. Moreover, Austria-Hungary wanted to occupy a part of northern Bessarabia for itself and it too dismissed the Ukrainian demands.

In this extremely tense situation, King Ferdinand commissioned Alexandru Marghiloman to form a new government, whose main purpose was to continue the negotiations and to conclude a peace treaty with the Central Powers. The formation of a Conservative Party government in Romania caused some concern in Chișinău, knowing of the opposition of this political party regarding agrarian reform. Representatives of the great landowners across the Prut River met with King Ferdinand and Prime Minister Marghiloman, the latter stating its non-interference in the matter of agrarian reform. Alexandru Marghiloman notes the following: “The Country Council, after having dispossessed the great landlords, has returned to less predatory sentiments and has set working rules, but these great landowners were however denied the means to cultivate their estates. The representatives

received by the King and by me: they proposed to obey the Romanian law, voted in Iași. We decided that, without interfering in matters concerning property, troops and horses will be given to the great landowners so the land will not remain uncultivated”.

Inculeţ and Ciugureanu attended the meeting of the Romanian Government in Iaşi, on March 23, in which it the union of Bessarabia with Romania was decided upon, following the vote in Chișinău by the Country Council. Prime Minister Alexandru Marghiloman went to Chișinău to attend the Council meeting on March 27 [N.S. April 9], which adopted the act of union. In his speech before the Country Council, Marghiloman assured that the freedoms and rights won by the Bessarabians would be respected, and that the Romanian government would not get involved in the agrarian issue. He said that after the unification, a constituent assembly will be convened, that will include the Bessarabia representatives, “to introduce in the Constitution the principles and guarantees shown above”. Following this speech, the Romanian representatives withdrew from the meeting room to allow the members of the council to discuss and to vote on the unification. Except for the Polish deputy, the representatives of other ethnic minorities have announced that they will abstain from voting. The unification of Bessarabia with Romania was approved with 86 votes for, 3 against and 36 abstentions.

The Union’s decree proclaimed: “On behalf of the Bessarabian People, the Council of the Country declares: The Moldavian Democratic Republic (Bessarabia) within her boundaries between the Prut, the Dniester, the Danube, the Black Sea, and her old frontiers with Austria, torn by Russia a hundred and more years ago from the old body of Moldavia, in keeping with her historical and national rights, on the basis of the principle that the peoples alone decide their fate, unites today and for all times with the motherland of Romania”.

The deputies decided that Bessarabia would retain its autonomy after the unification, and would benefit from the universal vote as the rest of the country. Also, the province’s inhabitants would retain their democratic rights and have their say in the Romanian Parliament. They would also have two representatives in the Government. The decision of the Bessarabian MPs, one of the most difficult moments in Romania’s history, was enthusiastically received by Romanians everywhere. Ample popular demonstrations were held in Iași, with thousands of people enthusiastically welcoming the Bessarabian delegation to officially announce the unification. At an official dinner, in honour of the representatives from Chișinău, King Ferdinand stressed the importance of the moment: “The realization of a dream that long ago lay in the hearts of all the Romanians from this side of the Prut and beyond it […]. You joined with the motherland in difficult times, as a young child, but with a true Romanian heart. “

In April, Ion Inculeț and Daniel Ciugureanu became ministers in the Government of Romania, and Constantin Stere was elected President of the Country Council, and Petre Cazacu was appointed Chief Executive Officer of Chişinău (Board of General Directors). The Country Council voted for agrarian reform on November 27, 1918, and the next day, the unconditional unification with Romania was proclaimed. The following year, in Bessarabia, elections took place for the Constituent Assembly of Romania, which ratified the union on December 20, 1919.