The US is at war. “We couldn’t believe it, even though it was something great” 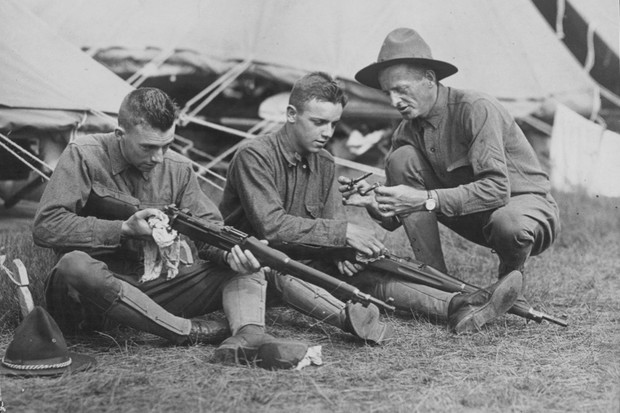 After three years of neutrality, the US was at war. At the beginning of 1917, Germany resumed unrestricted submarine warfare. This fact, combined with the indignation of the US public who had found out about the Zimmermann Telegram, led to a break in diplomatic relations with the Central Powers (February 3, 1917).

Following attacks on American merchant ships, President Woodrow Wilson called on Congress, on April 6, 1917, to declare war on Germany. Both houses of Congress passed the law by a large majority. Wilson hoped that he would be able to negotiate a separate peace with Austria-Hungary, but finding that this was not possible, the US declared war on Austria-Hungary on December 7, 1917.

By the time the US finally broke off relations with Germany, Muntenia was already under German occupation. For many this was a sign of hope. Here is what Sabina Cantacuzino, Ionel Brătianu’s sister, had to say about the situation: “The day of January 23/ February 5 was written in red in our calendar, because it had brought us the news of the breakdown of relations with the US. It was the last great power to declare war on them, no one was missing from the alliance against Germany.

What a feeling of horror they must have had  seeing the whole universe standing united against them! That’s why they’ve been hiding this news for almost a month for us, because it was the reason for the recall of Vopicka and Vredenburch. I felt that things were not looking up for them. The sudden departure of so many officers, their nervousness, the resumption of small persecutions, all indicated a serious state. We were jubilating. Indeed, Germany was the only giant capable of resisting such a coalition at least temporarily, but the end was near and it seemed closer than we had initially feared. Our wait had shortened from two years to the next fall, and this hope gives us renewed strength.

They took to Germany the Romanian prisoners, I don’t know how far they got. Many must have gotten frozen on the road. They had spread the rumour that Mackensen was leaving, without saying where. Lupu Costache boasted that they would make a big offensive in Galicia with 250.000 men. We did not know what would come next, and we were afraid of an attack in Moldavia from the north. Only the Bulgarians were sent against Sarrail, and the departing officers fearfully said they were going to Verdun and to Italy. We couldn’t believe it, even though it was something  great. They even recalled the 3000 soldiers who were restoring the oil wells from Câmpina and Bușteni. This news, coming from Mr.Ștefan Filipescu’s brother, was a serious symptom”.