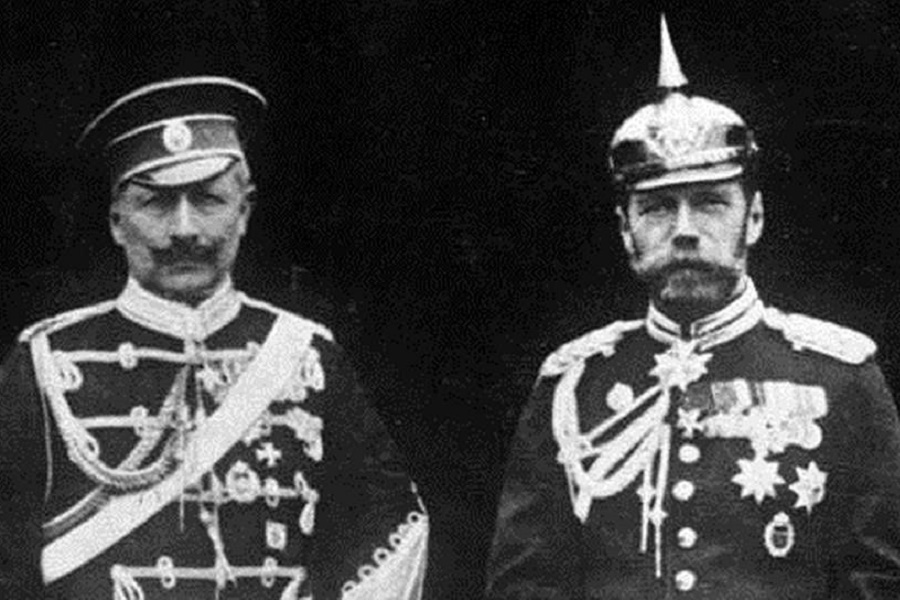 The Willy-Nicky Telegrams’, as they are known by historians, represent the correspondence between the German Kaiser, Wilhelm II, and the Russian Tsar, Nicholas II, on the eve of First World War, between July 29thand August 1st1914.

The two monarchs were third degree cousins, as great-grandchildren of Paul I of Russia, and first degree cousins through Nicholas’s wife. The two would seldom write to each other, in English, and would address one another as Willy and Nicky.

The telegrams sent during the so-called July Crisis precede the outburst of the war and represent the last attempt to amicably resolve, at the highest diplomatic level, the crisis that had started with Franz Ferdinand’s assassination.

Am glad you are back. In this serious moment, I appeal to you to help me. An ignoble war has been declared to a weak country. The indignation in Russia shared fully by me is enormous. I foresee that very soon I shall be overwhelmed by the pressure forced upon me and be forced to take extreme measures which will lead to war. To try and avoid such a calamity as a European war I beg you in the name of our old friendship to do what you can to stop your allies from going too far.

It is with the gravest concern that I hear of the impression which the action of Austria against Serbia is creating in your country.

The unscrupulous agitation that has been going on in Serbia for years has resulted in the outrageous crime, to which Archduke Francis Ferdinand fell a victim. The spirit that led Serbians to murder their own king and his wife still dominates the country.

You will doubtless agree with me that we both, you and me, have a common interest as well as all Sovereigns to insist that all the persons morally responsible for the dastardly murder should receive their deserved punishment. In this case politics plays no part at all.

On the other hand, I fully understand how difficult it is for you and your Government to face the drift of your public opinion. Therefore, with regard to the hearty and tender friendship which binds us both from long ago with firm ties, I am exerting my utmost influence to induce the Austrians to deal straightly to arrive to a satisfactory understanding with you. I confidently hope that you will help me in my efforts to smooth over difficulties that may still arise.

Your very sincere and devoted friend and cousin

I received your telegram and share your wish that peace should be maintained.

But as I told you in my first telegram, I cannot consider Austria’s action against Servia an ignoble war. Austria knows by experience that Servian promises ono paper are wholly unreliable. I understand its action must be judged as trending to get full guarantee that the Servian promises shall become real facts. This my reasoning is borne out by the statement of the Austrian cabinet that Austria does not want to make any territorial conquests at the expense of Servia.

I therefore suggest that it would be quite possible for Russia to remain a spectator of the austro-servian conflict without involving Europe in the most horrible war she ever witnessed. I think a direct understanding between your Government and Vienna possible and desirable, and as I already telegraphed to you, my Government is continuing its exercises to promote it.

Of course military measures on the part of Russia would be looked upon by Austria as a calamity we both wish to avoid and jeopardize my position as mediator which I readily accepted on your appeal to my friendship and my help.

Thanks for your telegram conciliatory and friendly. Whereas official message presented today by your ambassador to my minister was conveyed in a very different tone. Beg you to explain this divergency! It would be right to give over the Austro-servian problem to the Hague conference. Trust in your wisdom and friendship.

Thank you heartily for your quick answer. Am sending Tatischev this evening with instructions.

The military measures which have now come into force were decided five days ago for reasons of defence on account of Austria’s preparations.

I hope from all my heart that these measures won’t in any way interfere with your part as mediator which I greatly value. We need your strong pressure on Austria to come to an understanding with us.

Best thanks for telegram. It is quite out of the question that my ambassadors language could have been in contradiction with the tenor of my telegram. Count Pourtalès was instructed to draw the attention of your government to the danger &grave consequences involved by a mobilisation;I said the same in my telegram to you. Austria has only mobilised against Servia &only a part of her army. If, as it is now the case, according to the communication by you &your Government, Russia mobilises against Austria, my rôle as mediator you kindly intrusted me with, &which I accepted at you[r] express prayer, will be endangered if not ruined. The whole weight of the decision lies solely on you[r] shoulders now, who have to bear the responsibility for Peace or War.

On your appeal to my friendship and your call for assistance began to mediate between your and the austro-hungarian Government. While this action was proceeding your troops were mobilised against Austro-Hungary, my ally. thereby, as I have already pointed out to you, my mediation has been made almost illusory.

I have nevertheless continued my action.

I now receive authentic news of serious preparations for war on my Eastern frontier. Responsibility for the safety of my empire forces preventive measures of defence upon me. In my endeavours to maintain the peace of the world I have gone to the utmost limit possible. The responsibility for the disaster which is now threatening the whole civilized world will not be laid at my door. In this moment it still lies in your power to avert it. Nobody is threatening the honour or power of Russia who can well afford to await the result of my mediation. My friendship for you and your empire, transmitted to me by my grandfather on his deathbed has always been sacred to me and I have honestly often backed up Russia when she was in serious trouble especially in her last war.

The peace of Europe may still be maintained by you, if Russia will agree to stop the milit. measures which must threaten Germany and Austro-Hungary.

I thank you heartily for your mediation which begins to give one hope that all may yet end peacefully.

It is technically impossible to stop our military preparations which were obligatory owing to Austria’s mobilisation. We are far from wishing war. As long as the negotiations with Austria on Servia’s account are taking place my troops shall not make any provocative action. I give you my solemn word for this. I put all my trust in Gods mercy and hope in your successful mediation in Vienna for the welfare of our countries and for the peace of Europe.

I received your telegram. Understand you are obliged to mobilise but wish to have the same guarantee from you as I gave you, that these measures do not mean war and that we shall continue negotiating for the benefit of our countries and universal peace deal to all our hearts. Our long proved friendship must succeed, with God’s help, in avoiding bloodshed. Anxiously, full of confidence await your answer.

Thanks for your telegram. I yesterday pointed out to your government the way by which alone war may be avoided.

Although I requested an answer for noon today, no telegram from my ambassador conveying an answer from your Government has reached me as yet. I therefore have been obliged to mobilise my army.

Immediate affirmative clear and unmistakable answer from your government is the only way to avoid endless misery. Until I have received this answer alas, I am unable to discuss the subject of your telegram. As a matter of fact I must request you to immediatly [sic] order your troops on no account to commit the slightest act of trespassing over our frontiers.

The personal relationship between the two monarchs and their correspondence during those fateful days of July could have saved Europe from war. But the troubling context and the monarchs’ entourages caused both Wilhelm and Nicholas to distrust each other’s words.

After receiving the telegram in which the Tsar was telling him that Russia’s mobilisation mustn’t be considered an aggressive gesture and that he is still counting on Wilhelm’s mediation efforts, the German Kaiser realised he shouldn’t have trusted his cousin. Wilhelm believed that the Tsar had used Germany’s mediation efforts in order to gain a 5 days’ advance in Russia’s mobilisation, and that Nicholas had done this behind his back. On the telegram’s margins, Wilhelm wrote:‘The Tsar has simply tricked us with his call for help and he has deceived us… And so I must also order mobilisation… The hope that I wouldn’t let their mobilisation actions to disturb my mediator role is childish, and is only meant to decieve us… I consider my mediation efforts concluded.’

In fact, only after he had already given the general mobilisation order did the Tsar receive Wilhelm’s telegram in which he had asked him not to take the disastrous military measures. Nicholas immediately withdrew his order, as a gesture of goodwill towards his German cousin, and ordered a partial mobilisation. Afterwards, however, he was persuaded by his counsellors to stand by his first order.

And so the Kaiser ends up giving Russia a 12 hour ultimatum regarding the mobilisation. The Russian government will not respond to this ultimatum, which leads Germany to declare war on Russia.