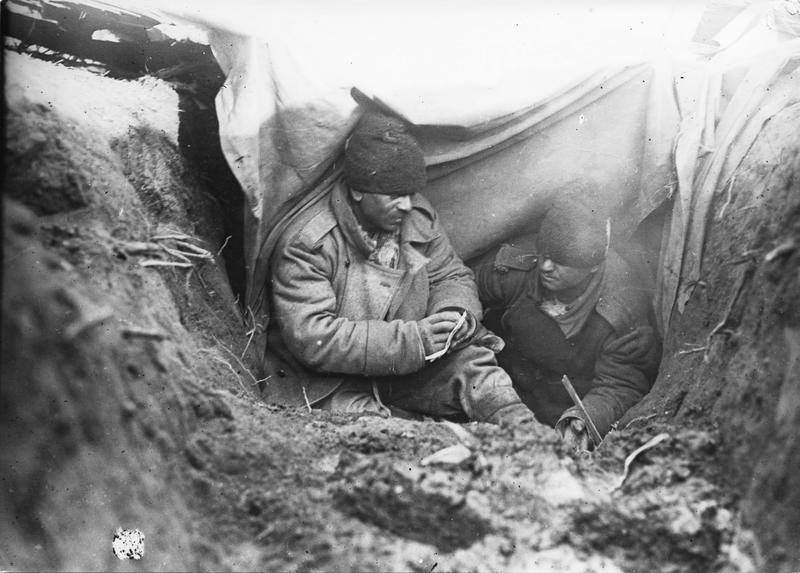 The fierce, ruthless pen of the Romanian politician Constantin Argetoianu described the grim situation that had found the Romanian refugees and soldiers in Iași during the First World War. Perhaps the Germans were not the true enemy, but typhus, which “killed nearly three-quarters of the 800.000 people we sacrificed for the achievement of our national unity”. The desperate measures to combat typhus taken by doctor Ioan Cantacuzino, helped by the members of the French Sanitary Mission, reduced the incidence of the disease among the refugee population.

“Whoever wasn’t in Iași during the winter and spring of 1917 cannot have an idea of ​​how it was. You could write a whole book, and it would still not be enough to describe the sufferings of an exhausted population who had fallen prey to the plague, which nowhere was as violent, for it had found nowhere else such favourable ground. The epidemic broke out with the cold, and because nothing was prepared to stop it, it spread all over, in a few days, like a plague. […] The typhus broke out suddenly everywhere, so everyone lost their heads.

Typhus was our true enemy; we fought it more than we did the Germans- it killed nearly three-quarters of the 800.000 people we sacrificed for the achievement of our national unity. It was a cruel and unnecessary sacrifice that will remain for naught and hopefully it will be an example for future generations. […]

The epidemic spread with unprecedented speed. People got sick and started dying like flies. There were apocalyptic scenes. Funerals were made in mass. There were no more planks for the coffins. Pic Ferechide, mobilized as a lieutenant on one of the trains, told me that his wagons had been designated for the laborious transport of the corpses, and that in the absence of a coffin, the dead were thrown in big holes dug in ground filled with lime. The lice had begun to crawl everywhere, and every day I would find one or two on myself. We began to distinguish the bad ones, they were black as they had already sucked blood. Fortunately, I only picked off of me, in these ugly times, white lice!

«From the thin and mired bodies faint groans lifted»

The lice had multiplied, but the sick also multiplied, for in addition to those in Iaşi, they came with the hundreds from outside the city. It is unbelievable, but trains filled with contaminated or sick soldiers were pouring daily into the Iași railway station. I’m sure those who are going to read these lines will blame me for making it up and yet they only evoke a pale image of the horrors that I’ve seen. In the midst of the epidemic, in February and March, the station platform, the waiting rooms, and the hallway where the ticket counters were located were filled with soldiers stretched on the cement or on the floor, dressed in rags and in patched up cloaks, with yellow-green faces, so thin that they were all skin and bones. From the thin and mired bodies faint groans lifted out of the bodies, and from some of them there was nothing coming out as death had already sealed their lips. They were no longer asking for anything, they were laying silently, and among them, on the ground, the lice moved in such numerous numbers that they crackled under the feet of the passers-by; to get on the platform, you had to cautiously go over the dying and the dead. I have seen many pictures of hell in my life, but neither the fantasy of a painter or that of a sketcher could paint such a tragic image of horror.

And because people always came- it is not known who sent them and what they were coming for, for every place is good to die- a triage service was installed there in the station. Of the 12 doctors, that had this job of honour and duty, 11 died. […]

In the city, the hospitals were full; there were special lazarettes and they were full. Car-trucks loaded with sick people were leaving the station, wandered from hospital to hospital as they could not be unloaded anywhere, because there was no place. Riding around the city with this load of dying people revolted the people, who were in the streets in search of food or news. Every once in a while, you met a wretch on the floor, green in the face like the patched-up mantle he had on his back, with a stick in his hand and a bag on his shoulder, leaning on others that were barely hanging on. They were advancing in small steps, no one, not even them knew where, until one collapsed and remained forever in place. […]

By the end of January and by February 1917 the situation had become intolerable. Under the pressure of public opinion and the French Mission- a number of French doctors and charity sisters had already arrived- the leadership woke up from its «deadly slumber» and appointed doctor Cantacuzino (Ion) as head of all sanitary services. Incidentally, I met Cantacuzino in Union Square on the very day of his appointment. He took my arm, he said, “come see something” and took me to Spiridonie. What I saw there surpassed the horror of what I saw at Iași Station. He cracked open the door to a few salons, but an indescribable odour, a stench of rotting and faecal matter carried by the stale air, in which all the effluvia, and so many heated breaths mixed, hit me right across the face and took me aback. It was impossible for me to step into one of these torture rooms, and the momentary terrifying vision through the open door was enough to disturb me deeply. For days on end, I wondered to what extent the strength of human suffering could be pushed. But Cantacuzino had entered where neither the doctors nor the orderlies wanted to enter, and seething with anger and indignation he told me what he had seen. Corpses, lying on the floor for several days that started to decompose, along with the dying and the sick, thrown senseless inside, through the quickly revolving doors- dejections were all over the place, garbs and dirty bandages thrown over the dead and living. Cantacuzino had already began cleaning the place. The orderlies, with rags soaked in phenol covering their noses, had resolved to finish this horrible work, encouraged by the example of their great animator. After 48 hours, the Spiridonie hospital was no longer recognizable.

Cantacuzino’s work was simply miraculous. He knew how to enliven the world. Of course, he was also helped by the French Mission, made up of over 80 doctors. The French sanitary staff was above all the praise, even gave us even a saint, Clunet, who gave his life for us in his fight against the epidemic, and a woman saint, Mrs. Goutel, as well fallen and sacrificed to her excess of devotion.”