What did Romania risk and what it had to gain if the war continued in 1918? 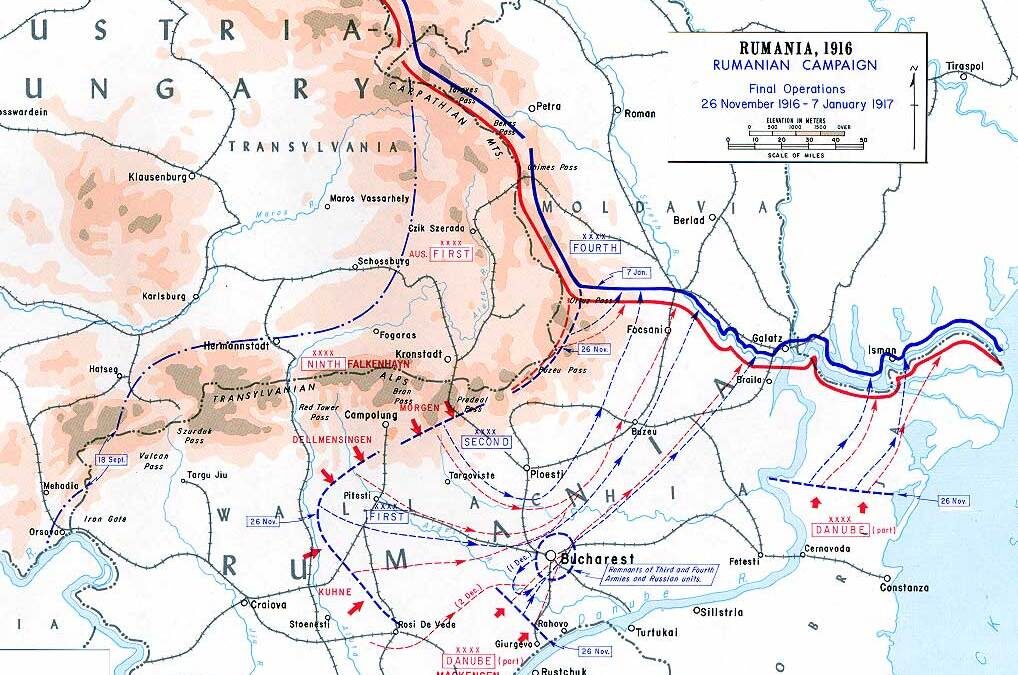 The Bolsheviks seizure of power in Russia had devastating effects on the Entente. They immediately announced that their main goal was to get Russia out of the war, and on December 5th they concluded the armistice with the Central Powers. On March 3rd, 1918, they signed the Brest-Litovsk Peace Treaty.

Romania was the country most affected by the decision of the Russian Bolsheviks, because it lost the territorial connection with the Entente and with it, the possibility of resupply. Even worse, it did not have the necessary armed reserves to cover the gap left in the front by the departure of Russian troops. Therefore, the Romanian political and military factors of that time decided that there was no possible way to continue the war.

What would have been the consequences of a military defeat of the Romanian army in 1918?

Romanian military historian Petre Otu gave a brief answer to this question. He believes that a failure, anticipated by all military analyses, would have had negative consequences in the short term. The Romanian state and the Romanian army would have been disbanded, and their reconstruction would have been quite problematic after the war, given the spectacular rise of Bolshevism in Eastern and Central Europe. Practically at the end of the war, in addition to Russia, the Bolsheviks had taken power in Hungary, and many other “revolutions” were organized in other countries, especially in Germany. The Romanian army, even if it had been partially demobilized after the peace of Bucharest (May 7, 1918), was at the end of 1918 and in 1919, the only power in the south-eastern region of the European continent that successfully fought Bolshevism, as it aimed to abolish, both by external subversion and especially by force of arms, the unified Romanian state. Let’s not forget that at the request of the Allies, the soldiers of the expeditionary corps that intervened in southern Russia were able to withdraw under the protection of the Romanian army.

The Romanian army also ended the Bolshevik regime of Bela Kun in Hungary, which threatened stability in central Europe. All these aspects reveal that the Entente powers did not have the necessary military capability to ensure peace and security in Central and Eastern Europe at the end of the war.

Romanian military historian Petre Otu said that: “In the long run, however, a failed resistance to the Central Powers would have increased the credibility of the Romanian nation and would have avoided the accusations of disloyalty attributed to Romania by some politicians or historians abroad. Internally, the spirit of pride and solidarity would have been strengthened, although at the level of the political class it is presumed that there would have been disputes over the «guilt» regarding this defeat.

What would Romania had to gain in the case of a successful resistance against the Central Powers in 1918?

The answer to this question was also given by military historian Petre Otu: “A successful resistance of the army would have been the ideal option for Romania. It would have fully complied with its commitments to its allies when it entered the war, and its international prestige would have been very high, both in front of the victors and the losers. At the Paris Peace Conference, Romania would have had a different status, but taking into account the multitude of interests, often contradictory, of the great and small powers, I do not think that Romania would have obtained more”.

In the case of a successful resistance in front of the Central Powers, there would have been internal consequences that would have led to the consolidation of post-war Romania. Petre Otu considers that: “Romanians would have had a different mood, and disputes within the political class, but also of the public opinion, related to the attitude towards the enemy between 1916-1918, would have been avoided. The victorious resistance of 1918 would have brought, most likely, to another conduct in the summer of 1940, when Greater Romania fell apart without a military retaliation, which was imperative. In the long run, the resistance of 1918 would have been an essential point of reference for the national consciousness, similar to that of 1917, following the great battles at the “gates of Moldavia”- Mărăști, Mărășești and Oituz”.