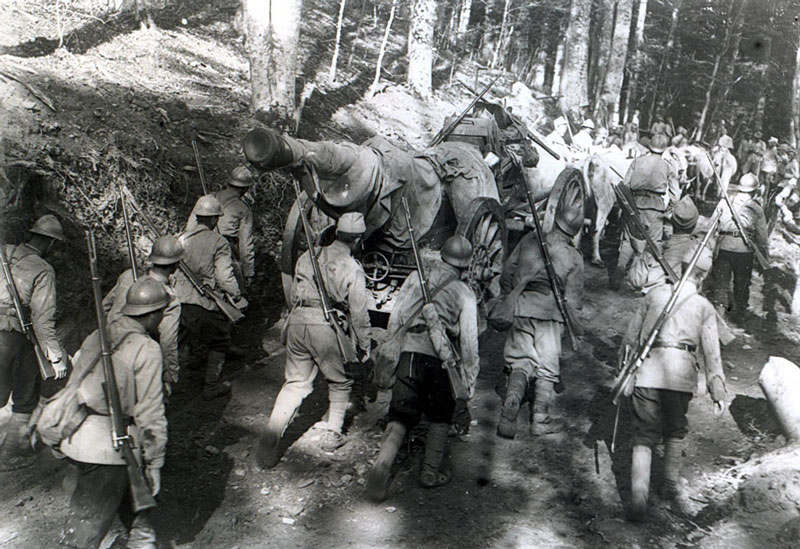 In the summer of 1916, the Romanian army was in a process of partial mobilization. This could not escape the attentive gaze of the Central Powers. Moreover, the pro-Entente attitude of the Romanian Prime Minister, Ionel Brătianu, was a red flag for Austria-Hungary. And yet, why were the political factors in Vienna and Berlin surprised by the entrance of Romania into the war?

In the beginning of the summer of 1916, the negotiations between Romania and the Entente accelerated. The Central Powers knew about the talks from two sources: the first was the interception of Italy’s diplomatic correspondence. In the spring of 1916, Austrian cryptographers broke the Italian diplomatic code and were aware of the negotiations conducted by Romania. The second source was represented by the military reports showing that the total mobilization of the Romanian army was almost imminent. German attachés to Bucharest periodically transmitted cables relaying the measures taken by the Romanian army. Thus, Romanian officers and soldiers had their furloughs suspended beginning with August 4; a requisition of horses, wagons and vehicles was imminent (3 August); an enlistment of the reservists was ordered (August 5); Russian troops were massing in Bessarabia, and the wide track gauge was extended to Iași; trains with military supplies from Russia were arriving more and more frequently in Romania. All these measures alarmed Colonel Hans von Hammerstein who reported on August 11 that the Romanian army is “on a war footing grouping two-thirds of its offensive operational units against Transylvania and a third against Bulgaria. In the current rhythm, it may be ready to attack Transylvania by the end of August.”

Living in a different reality

The authorities in Vienna and Berlin overlooked these signs due to information sent by their ambassadors in Bucharest. Both the Austro-Hungarian ambassador, Count Ottokar Czernin and the German, baron Hilmar von dem Bussche, considered at that time that the Romanian Prime Minister, Ionel Brătianu, wanted to enter the war on the side of the Entente, but King Ferdinand, from the house of Hohenzollern, will be opposed. The two coordinated their actions on this premise. In their opinion, the Romanian King’s ethnic and familial ties with his relatives in Germany will prevail over Romania’s campaign objectives towards Transylvania. As such, both have sought supporters among the politicians in Bucharest. Czernin and Bussche hoped that if Ionel Brătianu would engage Romania in war on the side of the Entente, King Ferdinand would oppose him and replace Brătianu’s government with a Germanophile led one by philosopher and conservative politician Titu Maiorescu. All the information sent by the two ambassadors from Bucharest to the governments of their countries was based around this probability.

In fact, the Chief of the German General Staff, Erich von Falkenhayn, considered in mid-August that he “sees no imminent danger” on the part of Romania. Later, he would say, “I thought that Romania’s entry into the war, if it were to happen this year, had to take place after the harvest, that is, towards the end of September.”

On August 17, 1916, the Romanian Prime Minister, Ionel Brătianu, signs the alliance treaty with the Entente, by which Romania pledged to enter the war no later than August 28. The country’s army was already in procedure of partial mobilization that would turn into total mobilization on August 27.

Three days after the signing of the treaty between Romania and the Entente, Ottokar Czernin telephoned the Austro-Hungarian Foreign Minister Stephan Burián von Rajecz from Sinaia informing him that: “a secret news that came from abroad says that Mr. Brătianu signed today a political agreement with Russia and that the other diplomatic representatives of the Entente were given the mission to adhere to it. (…) Tomorrow, the King will leave for Bucharest. He summoned Mr. Brătianu for Tuesday evening. This is very interesting in such conditions, although there is no proof that there will indeed be a break with Brătianu. As we have learned from a safe source, the King wants to tell Mr. Brătianu that he will no longer tolerate his stirring of the country and by summoning Mr. Titu Maiorescu at the same time he might want to show Brătianu that there are other possibilities.” Intoxicated with information from the people in the entourage of the Romanian king, Czernin still believed that Ferdinand would not allow Brătianu to engage Romania in a war on the side of the Entente.

Emperor Wilhelm II of Germany was of the same opinion that Ferdinand would not to enter the war against the Central Powers. We know this from a telegram sent by the Austro-Hungarian ambassador in Berlin, Prince Gottfried von Hohenlohe-Schillingsfürst, to Burián. The telegram was sent, ironically, on the same morning of Romania’s declaration of war against Austria-Hungary with the following message: “(…) Emperor Wilhelm II congratulated King Ferdinand by telegraph in a cordial manner on his birthday and at the end he added that he hopes with all confidence that the ties of kinship between the two dynasties will not even allow in these difficult moments that the relations between the two countries be in any way endangered. King Ferdinand thanked him for his good wishes, but made no reference to the second part of the telegram.”

Immediately after Brătianu had signed the treaty with the Entente, the Crown Council of Romania was scheduled for the morning of August 27 to inform political and institutional leaders. On the same day, Romania would make the mobilization public, which was already in its preliminary stages. The news that Romania would enter the war on the part of France, Great Britain, Italy and Russia would produce great manifestations of joy in the streets of Bucharest. In Germany, instead, it caused dismay.

On August 27, 1916, at 22.30, the news that Romania declared war on Austria-Hungary was brought to the attention of Emperor Wilhelm II, who “lost his temper and declared that the war was lost to Germany”.

Falkenhayn too was totally taken by surprise. Initially he did not believe the news. But he would pay for misinterpreting Romania’s intentions. He was replaced by a tandem consisting of Field Marshal Paul von Hindeburg and General Erich Ludendorff.