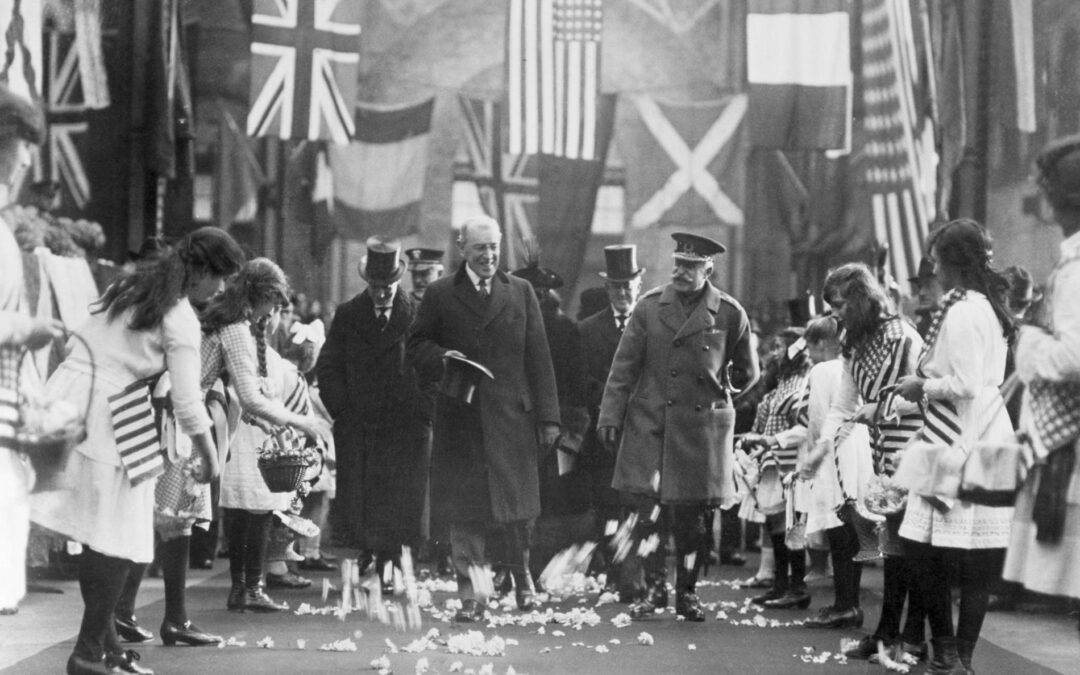 US President Woodrow Wilson believed that the Russians alone had to find their way. He told a British diplomat in Washington a week before the end of the war that: “I think we have to let them find their own way out, even if they have been struggling in anarchy for some time”. He continued: “This is how I see things: a lot of really impossible people are fighting with each other. Since you can’t reach an agreement with them, you lock them up in a room, close the door behind you and tell them that once they solve their problems, you will open the door and negotiate”, Wilson said.

The lack of information about the Bolsheviks led US President Woodrow Wilson to believe in the beginning that their goal was to limit the power of big business and government and to provide extended freedoms to individuals. Wilson warned his Peace Conference counterparts that: “If the Bolsheviks had come to their senses and agreed to a policy of harmonious rule of law, then their ideology would probably have spread throughout Europe, leading to the overthrow of the governments in power”. Wilson would say that the seeds need soil and in that respect the seeds of the Bolsheviks found fertile soil to be planted.

He believed that according to the principle of self-determination, the Russian people had to find a way to govern themselves. In accordance with the sixth point of the Fourteen Points, the US president argued that foreign armies should evacuate Russian territory [here Wilson was primarily concerned with the Japanese], so that the Russians could choose the form of government they needed. Only after deciding who would lead them [Wilson hoped the Russians would not elect the Bolsheviks], the United States would recognize the Russian-led government. Wilson liked to point out that the country had done the same in the Mexican Civil War.

During the Peace Conference, Wilson also came up with the idea that all factions fighting in Russia should meet with the Allies on Prinkipo Island. The Bolsheviks would refuse to participate in this meeting. The Whites opposed such a meeting from the get go. Therefore, the meeting on Prinkipo Island did not take place.

When Churchill took over the Bolshevik matter, he spoke with the US president in Paris on February 14th. Churchill explained that the uncertain intentions of the Allies harmed both Western troops stationed in Russia and the Whites. In his opinion, the withdrawal would have spelled disaster. “Such a policy would mean total abandonment. There would be no more armed resistance against the Bolsheviks in Russia, and the country would have a violent and unhappy future”. Wilson remained reserved, acknowledging that Allied troops were not very useful in Russia, but that the situation was too confusing there for the Allies to intervene militarily. Immediately after meeting Churchill, Wilson returned to the United States for a short time. Churchill’s idea of ​​a possible intervention in Russia seems to have given the US president something to think about. On his way to the United States, Wilson issued a warning to Allied leaders: “I am deeply surprised by Churchill’s suggestion regarding Russia. It would be fatal to let ourselves be involved even more in the Russian chaos”, he transmitted by telegraph. Failing to mediate a meeting between the different Russian factions, both Wilson and Lloyd George gave up on trying to negotiate with the Soviet government, although they continued to hope that the Bolsheviks would miraculously transform in good democrats, The two flirted for a short time with the idea of ​​sending aid to Russia, to calm the Bolsheviks, and with the passage of time and in light of this help, they hoped that the Russian people would abandon Bolshevik ideals. However, the Bolshevik leaders from the outset refused any help from the Allies.

The Allies, Kolchak’s offensive and the Bolsheviks

The success of Kolchak’s offensive against the Bolsheviks in early 1919 led the Allies to partially recognize Kolchak’s government on May 23, 1919. “The chosen moment came exactly one minute too late”, Churchill later wrote. The Bolsheviks had taken the initiative in fighting the Whites while the Peace Conference was almost concluded and the Germans were called to sign the Treaty of Versailles. There was no time to do anything about Russia at the Peace Conference. A short clause was drafted stating that any treaty concluded in the future between the Allies and Russia should be recognized internationally. Another clause gave Russia the opportunity to demand war reparations. The policy of Bolshevik isolation would continue.