When Bucharest was under occupation. The beginning 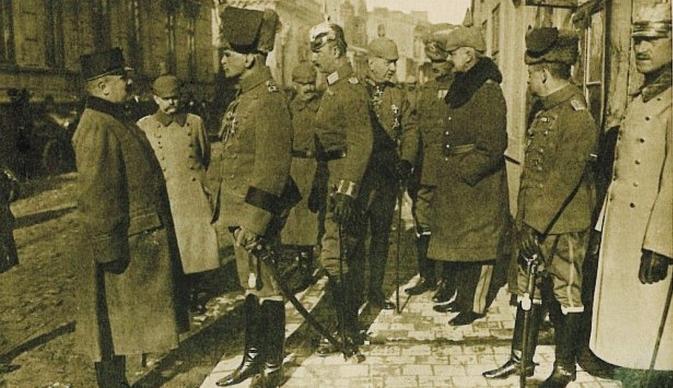 August 1916. A good decision followed by a string of tragedies like in a game of domino. Romania was not prepared and Bucharest had to be sacrificed. It had to be abandoned and left in the hands of the enemy. Many had left to the former capital of Moldavia-Bucharest was not Romanian any longer.

“But the shock will be so formidable, that a terrible misery would get a hold on mankind for many years to come. From one crisis we will go into another. Remember it well: my generation and yours will see a Greater Romania, but it will not see better times”, said Take Ionescu prophetically, at the start of the Great War when king Carol I of Romania decided on the neutrality of the country. Two years later, Romanians would put all of their hopes and dreams in the contents of an envelope. It was August 14, 1916 when the last Romanian diplomat in the capital of the Austro-Hungarian Empire, Edgar Mavrocordat, received from the Council of the Crown, convened at Cotroceni, a sealed envelope, that contained the war declaration, signed half-heartedly by the Minister of Foreign Affairs, Emanoil Porumbaru. Even with zeppelins streaking across the sky the people were optimistic.

The Z hypothesis envisioned “the realization of our national ideal, the unification of our people, through the liberation of territories inhabited by the Romanians which find themselves today in the Austro-Hungarian monarchy”. This was on the mind of every man who was about to fight. Consequently, a few days after the entry into the war, Romanians already celebrated a great victory in the Carpathian Mountains. But Romania was depending from the beginning too much on hope and trust. The Allies did not respect their obligations and the desire to win a battle in their war brought the Romanians down. They wished to build a bridge between lands inhabited by fellow Romanians, but the battle of the Turtucaia bridgehead drowned any hope for that.

The Romanian army tried to organize itself in the chaos. The plans put forward by Prezan and Averescu didn’t pan out. Winter brought the German-Bulgarian army over the Danube. The battles on the Argeș and Neajlov were in vain. Not even the blood spilt by the soldiers in the Prunaru charge managed to save the capital. It was December 6, 1916 and at the entrance into the capital the flag was at half-staff, Bucharest surrendered. News travelled fast. Through newspapers, through word of mouth or hearsay in the trams. People in Bucharest, seemingly unmoved until then, were rumbling. It was a city of whispers and shadows. Nothing was to be transmitted officially, not even to officials. In the words of Sabina Cantacuzino, who stayed in the country during the German occupation: “The populace, less able to judge in foresight, was not discouraged, but the rich, fearing the Bulgarians, for the sake of their lives and fortunes, were fleeing to the West. Thus, the entire Văcărescu-Callimachi family and many others, taking with them silverware, tools and even rugs, went to Paris, where they later worked for the Red Cross and in hospitals, but from where they did not return after peace was made.”

The winter of 1916 was witness to many horrors. The Minister of Education at that time I.G. Duca wrote about the refugees: “The sight on the road was indescribable: men, women, children, the sick, the elderly, the disabled, on foot, in wagons or riding on horses were trudging through the rain, the wind, the cold and through the snow. Some have gathered in a hurry what they could of their belongings and were now dragging them along. Others could not go forward and they would fall over tired and starved along the roads. Others died in ditches and their decaying bodies were left to the crows. Beside this, the exodus of the civilian populace combined with the retreating army convoys, while soldiers, passing in a hurry to execute whichever orders they were given, overturning everything that stood in their path, created great confusion, in the distance you could hear enemy fire, children were screaming, women crying, people shouting, the rain would not stop, the cold was starting to pick up, a village was bombarded on one side, while in the other you could see fires. It was a hellish vision”. The Great War suspended the beginning of a new school year. Schools were changed into hospitals and teachers and professors mobilized to help, most of them dealing with identifying the wounded and maintaining a record of them. There, together with those in distress, ladies of high society changed into simple nurses.

In short, this was how the long way to refuge started. Romanians were leaving behind an occupied Bucharest, enduring disease, hunger and misery away from home.