Year 1919 – Pogroms from Ukraine and Poland 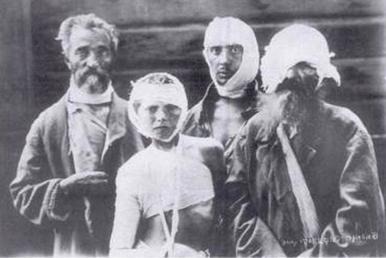 In 1919, nearly one hundred thousand Jews were murdered in Ukraine and Poland in pogroms. These ethnic riots dominated headlines and international affairs of their time as aid workers warned that six million Jews were in danger of complete extermination. Twenty years later, these dire predictions came true. This talk examined how the genocidal violence that engulfed the region right after the revolution laid the groundwork for the Holocaust.

“I had always thought that the Holocaust was simply inconceivable before it happened […] that it was beyond the ability of human beings to imagine, to predict, to prepare for. But the evidence seems to be clear that the murder of 6 million Jews throughout Europe was not only conceivable but was being discussed as a distinct possibility twenty years before it became a reality […] If you look at Jewish, Russian, and Polish sources from the time, there is a great deal of discussion of what people fear will be the coming […] physical extermination of the Jewish race.” said Jeffrey Veidlinger, Director of the Frankel Center for Judaic Studies, University of Michigan

“My argument is that the pogroms of the Civil War prepared the ground for the genocidal violence that took place in the same towns against the same people twenty years later by rendering the inconceivable conceivable […] and by emboldening foreign invaders – the Germans –  to push beyond where previous massacres had gone.”

“In Poland and Ukraine, Jews tended to live in the center of town […] the market squares tended to be Jewish shops.  And this was the same group that was often attracted to Bolshevism which led to that perception […] But this does not mean that all Jews were Bolsheviks or that there was any justice to targeting them […] In the Zhytomyr pogrom, it is noteworthy that the first acts of violence took place in the wealthiest areas of town which is where there was a Jewish bourgeoisie – these are the people least likely to be Bolsheviks, yet the perpetrators continued to use anti-Bolshevik rhetoric as justification” said Jeffrey Veidlinger.

Case of Ukrainian city of Proskurov

February 15, 1919, was the first day of a three-day pogrom in the Ukrainian city of Proskurov, in which some 1,500 Jewish residents of the town were killed.

The murderous attacks, carried out by Cossacks who were instructed to kill as many as possible, at the same time they were told not to touch any valuables, took place against the chaotic background of Ukraine’s civil war, which followed the Russian Revolution and the end of World War I.

In early 1919, Symon Petlura became head of the Directorate of Ukraine, a provisional revolutionary government. Petlura is a controversial character in Jewish history, and there is disagreement as to whether he tried to protect the Jews of his land, or was an active participant in their persecution. (Sholom Schwartzbard, who assassinated him in Paris in 1926, held the latter opinion: He held Petlura personally responsible for the murder of 14 members of his extended family during this period.)

Proskurov was a city of some 50,000 residents, about half of whom were Jews. In 1921, Elias Heifetz, the American chairman of the All-Ukrainian Relief Committee for the Victims of Pogroms, published a report that detailed the unfolding of the slaughter there.

Ten days before the the violence broke out, the head of the Zaporog brigade of Cossacks from the Ukrainian Republican Army, named Semosenko, received intelligence that Bolsheviks were planning a revolt against the local government.

Semosenko had recently arrived at a garrison in Proskurov, where his regiment was joined by the so-called Gaidamak Cossacks, and announced that he was in charge of the security of the city, and that he would brook no subversive activity, nor any incitement to pogroms.

Word was transmitted to those planning the Bolshevik action that this would not be a good time for a revolt.

As predicted, early on the morning of February 15, 1919, an uprising was mounted, but it was feeble, and easily put down.

According to Heifetz, the same Semosenko who a few days earlier had forbade attacks on the Jews of Proskurov, now plied the Gaidamak Cossacks with vodka and cognac, and ordered them to exterminate as many Jews as possible, describing them as the eternal enemies of the Ukrainian people. At the same time, he forbade them to touch the Jews’ property.

Over the next few hours, Semosenko’s troops murdered some 1,500 Jews (estimates vary) in Proskurov. From there, they went on to nearby Filshtein, where they killed an approximate 600 of the town’s 1,900 Jews, this time without any restrictions on robbery, or rape either.

Proskurov may have been the worst of this wave of pogroms, in terms of numbers. But Veidlinger reports how, in 1922, the Soviet Commissariat of Nationality Affairs counted a total of 1,200 pogroms in total having taken place during the preceding five years, with a little over 100,000 victims killed.

In 1954, the city of Proskurov was renamed Khmelnytsky, in honor of the 300th anniversary of a treaty negotiated by Bohdan Khmelnytsky with Russia. In Ukraine, Khmelnytsky is a national hero, for the revolt he led in the 17th century against the Polish-Lithuanian Commonwealth that then ruled Ukraine.

In the collective Jewish memory, however, he is remembered as the Cossack leader of an earlier series of pogroms that killed tens of thousands of Jews.